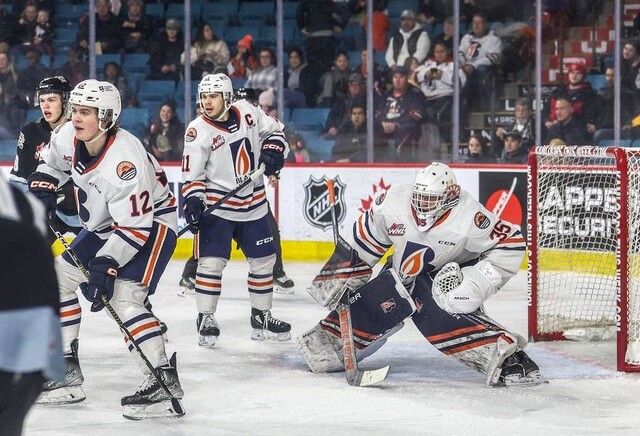 Dylan Sydor scored a pair and Dylan Ernst made 45 saves Wednesday at Sandman Centre as the Kamloops Blazers beat the first-place Portland Winterhawks 5-1.

The Blazers led 3-0 after two periods before Portland started to apply pressure in the third. Chyzowski scored at 12:56 to give the Winterhawks life and bring them within a pair, but Sydor and Stankoven answered back in short order to put the game back out of reach.

Dylan Ernst made 45 saves on 46 Portland shots to earn his 25th win of the season in net, which is tied for the WHL lead. Dante Giannuzzi stopped 35 of 39 Kamloops shots in a losing effort.

The Blazers were scoreless on two power-play opportunities and the Winterhawks could not score on three chances. Stankoven’s empty-net goal was scored short-handed.

Announced attendance at Sandman Centre was 5,389.

With the win, the Blazers improve to 28-10-4-2 on the season, first place in the WHL’s B.C. Division and second in the Western Conference to the Winterhawks, who fall to 34-9-2-1 with the loss. 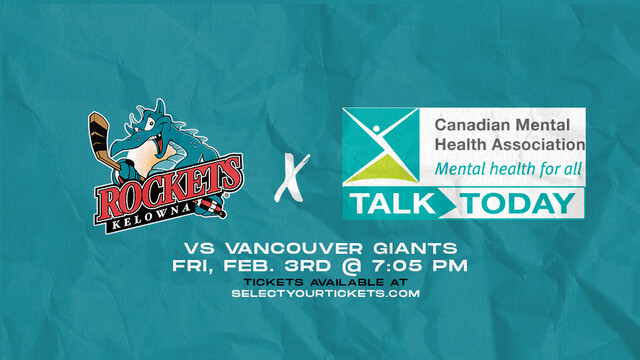 The Kelowna Rockets have partnered with the Canadian Mental Health Association for a mental health awareness game on Friday when the Rockets take on the Vancouver Giants.

The game-day experience will have several features to promote the importance of mental health, including a CMHA-run kiosk where fans can learn more about mental health and the organization’s community-based services.

During the game, videos will also be played featuring Rockets players talking about the importance of mental health.

The mental health awareness game is part of the Rockets ongoing partnership with CMHA Kelowna and its Talk Today program.

Launched across the Western Hockey League in 2016, Talk Today provides an opportunity to address the mental health needs of players. Through this program, over 800 WHL players and over 100 coaches, billets and staff have received mental health and suicide prevention training across the league.

"The Talk Today event helps us to reduce the stigma associated with mental health issues which so often keeps people from seeking the help they need,” said Mike Gawliuk, CEO at CMHA Kelowna.

“We hope that players, coaches and fans will use this event to start a conversation about mental health and will encourage people of all ages to seek help when they need it."

Single-game tickets for all Rockets home games are on sale at Select Your Tickets. Tickets can be purchased online through www.selectyourtickets.com, at the Prospera Place box office, or by phone at 250-762-5050. 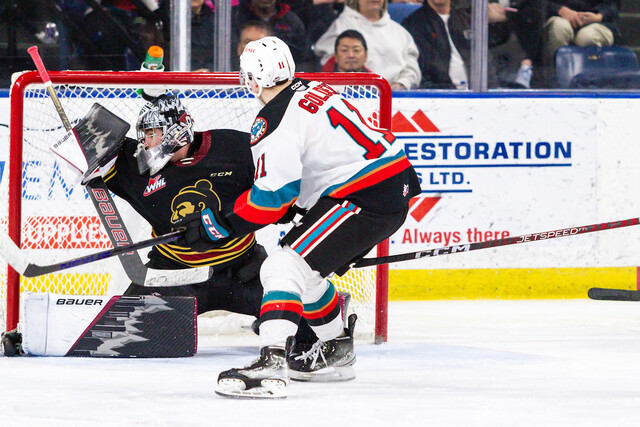 They were all of that and then some.

The top line of Gabriel Szturc, Carson Golder and Adam Kydd combined for four goals and five assists in a convincing 5-1 victory over the Vancouver Giants at Prospera Place.

It was just their second win on home ice in 11 games and seventh in 21 overall. The win was also just their third in 15 games since the Christmas break.

"It was a little touch and go to say the least, but boy in the third period did they come out to play," said Mallette.

"I challenged quite a few guys. Early we were trying to be something we weren't, forcing plays...refusing to buy into those little habits and little details.

"Credit to the group. As the game wore on they got better and better and saw the rewards from it."

Marcus Pacheco opened the scoring for the Rockets before Dylan Anderson equalized on the power play just past the midway point of the first.

The Rockets top line took over from there

Szturc scored what proved to be the game winner 8 minutes into the second. Golder won a race for the puck in the offensive corner, circled the net and spotted Szturc positioned in the low slot.

The Rockets captain returned the favour and more in the third.

After Golder had upped the lead to 3-1, it was Szturc who did the work digging the puck out of a scrum in the corner before spotting his linemate in front for an easy tap in.

"He's a shooter. He's got a shooters mentality," said Szturc of Golder.

"You could see that tonight. That hat trick was well deserved."

Golder completed the natural hat trick with an empty net goal with under three minutes left.

Jari Kykkanen, making his first start in two weeks turned away 29 shots to earn the victory.

He was especially sharp in the second period making a handful of key saves to keep the game close and give the offence the chance to do their thing.

"He's a hell of a goalie. He was pretty calm back there. He's our goalie of the future," said Mallette.

"Tonight was Jari being Jari which was great. To get a win for our group and for him to be a part of it is a credit to him and a credit to our room."

Rookie Ismail Abougouche once again added to his growing reputation around the league as one of the toughest pugilists in the league.

Abougouche, just 16, earned a unanimous decision in a spirited tilt with Tyler Thorpe in the final minute, despite giving up three inches and about 20 pounds to his larger opponent.

"He is a young player at 16 that, give him some time and he could be very feared in this league.

"Look at his game, last night he played 20 minutes, tonight probably another 15 to 18. It's great for us in the back end to have that type of player that will stick up for his teammates and take a number if things go sideways.

The win allowed the Rockets to remain in an eighth place tie with the Victoria Royals in the west after they edged Kamloops 3-2 Saturday.

The Rockets are off until Friday when they host the same Giants.

They'll finally face someone not named the Giants Saturday when they host the Prince Albert Raiders. Then it's three straight against the Cougars.


Third-period comeback comes up short for Blazers in Victoria 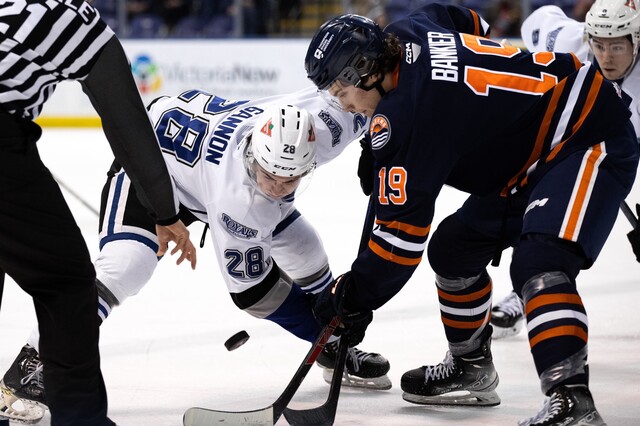 A third-period comeback came up short for the Kamloops Blazers on Saturday in the provincial capital as they fell 3-2 to the Victoria Royals.

Fraser Minten and Ryan Hofer were the goal scorers for the Blazers. Teydon Trembecky, Matthew Hodgson and Jake Poole scored for Victoria.

The Royals led 2-0 after 40 minutes when Minten scored 63 seconds into the third to get the Blazers within a goal. Poole restored Victoria’s two-goal lead six minutes later and Hofer answered right back, but that was all the scoring the visitors could muster.

Dylan Ernst made 21 saves on 24 Victoria shots in a losing effort. Braden Holt stopped 24 of 26 Kamloops shots to earn the win in net.

The Blazers scored once on six power-play opportunities. Victoria scored one goal on three chances.

The loss moves the Blazers to 27-10-4-2 on the season, still comfortably atop the standings of the WHL’s B.C. Division and second in the Western Conference, nine points back of the first-place Portland Winterhawks (33-8-2-1), who overtook the Seattle Thunderbirds (33-8-1-1) on Saturday with a 5-2 win over the T-Birds in Kent, Wash.

The Blazers will be back in action on Wednesday when those same Winterhawks visit Sandman Centre. Puck drop is slated for 7 p.m.