Turning left when the traffic light is red

Left turn on a red light 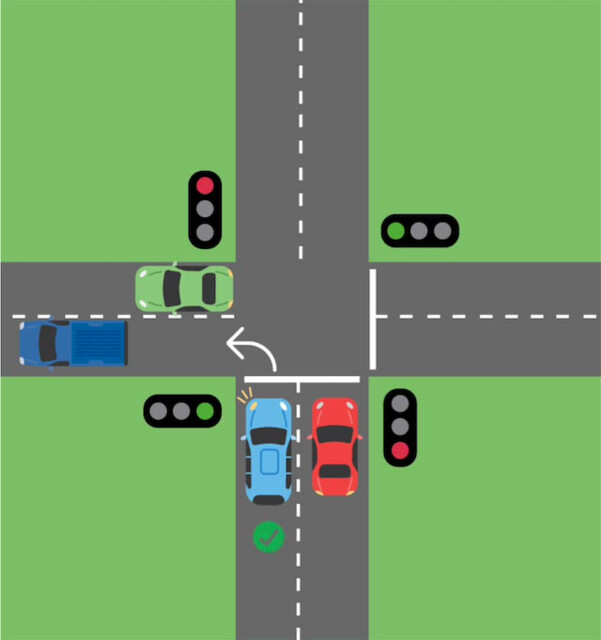 When I was relatively new to police work, I was patrolling behind a car that stopped at a red light with the left turn signal blinking.

The next thing I knew, the car turned left against the red light. Well, on went the lights and siren and I chased down this alleged red light runner. This would be an easy ticket, or so I thought.

"What do you mean officer?" asked the driver. "I'm allowed to turn left on a red light if I turn onto a one-way street,” said the driver.

I collected his documents and went back to my police car. Out came my copy of the Motor Vehicle Act and I read section 129 on red lights carefully. This driver was absolutely correct. I gave his documents back and apologized with a face that was likely just as red as that traffic light had been.

Unless you are turning from a one-way street, remember you have to look further across the intersection for other road users when shoulder checking before making a left turn on a red. Traffic will not be right beside your vehicle as it is when you make a right turn on red light.

The right-of-way rules for left turns apply. Drivers turning left on a red must yield to both cross traffic and right turn traffic on the other side of the intersection as necessary.

Some drivers will be upset that you make this turn and some will be upset if you don’t. As always, you need to choose to do what you are comfortable with to be safe and that choice may be to wait for the light to change.

Left turns may also be prohibited by signs at intersections. The prohibition could forbid all left turns or left turns during specific times of the day.

Laws are not uniform across North America and you will have to make sure that this turn is permitted before you do it when driving outside of B.C.

Rules of the road for cyclists 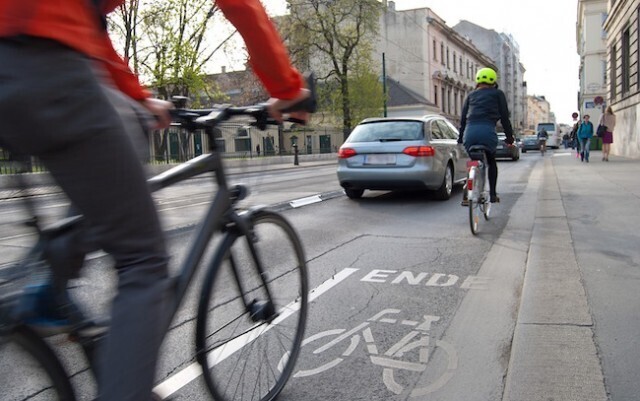 "Are there rules for riding bicycles?" a reader asked after narrowly missing a collision with a bicyclist. "They seem to ride wherever they feel like it. How is a driver supposed to know what bicycle riders are going to do?"

The most significant concept in the Motor Vehicle Act is that the rider of a bicycle is just like the driver of a car.

183 (1) In addition to the duties imposed by this section, a person operating a cycle on a highway has the same rights and duties as a driver of a vehicle.

There are some limitations, such as the cyclist must ride as nearly as practical to the right hand side of the highway, but is not expected to ride off of the pavement. In other words, motor vehicles and bicycles must share the road with each other.

The duties that the cyclist has include the rules of the road that drivers are subject to. They must obey speed limits, stop at stop signs, ride on the correct side of the highway and give arm signals so that other traffic knows what the rider intends to do.

A number of specific duties are required of cyclists. The most are common sense, such as keeping at least one hand on the handlebars, being seated properly on the seat, carrying only the number of passengers that the bicycle is designed for and having proper lights and reflectors when riding at night.

Many people have the mistaken belief that cyclists must always ride in single file. This rule only applies to cycling on the roadway. One can ride on the roadway beside another cyclist using the shoulder.

Sidewalks and crosswalks must not be used by cyclists unless permitted by a by-law or directed to do so by a sign.

The Motor Vehicle Act does not specifically take into account new active transportation infrastructure, such as cycle lanes, bike boxes and the like. In fact, the Ministry of Transportation and Infrastructure has advised it will not create these facilities on the highways that they are responsible for. Instead, these facilities are created by municipalities and regulated through bylaws.

So, unless a bylaw has been enacted to require it, cyclists do not have to use a cycle lane instead of the roadway when a cycle lane is present.


When changing lanes don't force traffic behind you to tailgate 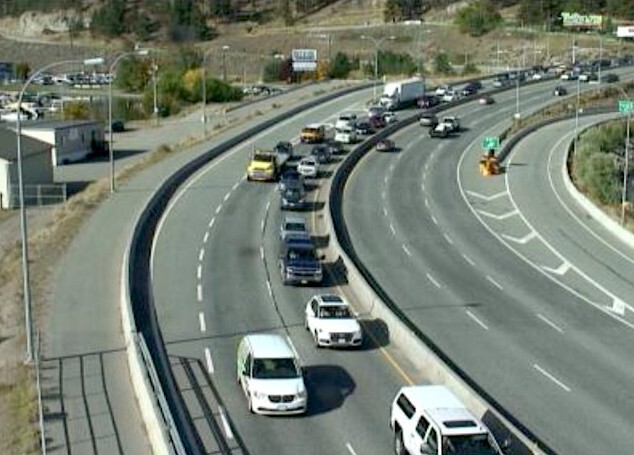 I hope most drivers subscribe to the “two-second” rule under good driving conditions and increase the following distance when the situation is not ideal.

It certainly makes sense to leave sufficient room between your vehicle and the one you are following to create a safety margin. Why then do some drivers make lane changes that force the driver behind them to be a tailgater?

When I was being taught to drive, the instructor said I was not to make a lane change until I could see all of the front of the vehicle behind me in my centre rearview mirror. That would insure there was a safe distance between us when I did move over in front of the other driver. Unfortunately, it appears this has been forgotten by, or is not being taught to, drivers today.

Leaving enough space before changing lanes in front of a semi is critical for safety. Heavy commercial vehicles can have as little as 50% of a light vehicle's braking ability. For this reason alone, you do not want to be in the “No Zone” in front of a truck.

All too often I am cruising in the right lane at the speed limit when I am overtaken by another driver who may or may not signal before jamming their vehicle in front of me about two vehicle lengths away. I have to drop back to maintain my space cushion and this becomes especially difficult if the driver behind is tailgating me.

A driver must not drive from one lane to another unless the driver has ascertained movement can be made safely and will in no way affect the travel of another vehicle. That requirement is straight forward. If I have to slow to maintain safe following distance after you change lanes in front of me, you are in violation.

• Decide well in advance that you want to change lanes. Look ahead for potential problem areas.

• Mirror check to see if there’s a safe gap in traffic.

• Steer steadily into the other lane, looking ahead in the direction you want to go. Keep at least a two-second distance behind the vehicle in front of you.

• Maintain your speed as you change lanes.

• Straighten and centre yourself in the lane.

• Make sure your turn signal is off.

Remember, half the driving world is in your rearview mirror and deserves as much of your consideration as the half in front of your windshield. 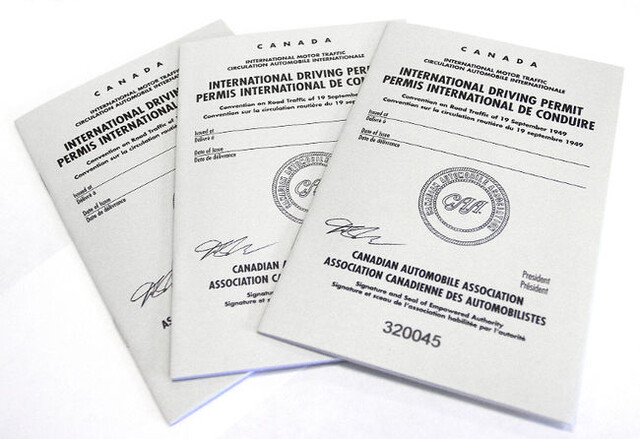 Their belief is that the IDP alone allows them to drive here at home and abroad, perhaps even when they do not hold a valid driver's license or are prohibited from driving.

An IDP is really nothing more than a translation of your current driver's license into other languages for the convenience of the authorities in other countries when you travel.

Like a passport, an IDP is in booklet form and include a photo of the driver, his or her name, date of birth and a description of the types of vehicles they are permitted to operate.

Some countries require you to produce an IDP and some do not. The government of Canada Travel Advisories Page lists requirements by country and will specify IDP requirements.

Where do I get an IDP?

In Canada, authority to issue an IDP rest with the Canadian Automobile Association (CAA). The British Columbia Automobile Association is the provincial arm of the CAA and anyone aged 18 or older can apply for an IDP by filling out an online form, enclosing a photocopy of both sides of your current driver's license, two passport photos and a fee of $25. The IDP is intended for use outside of Canada and is valid for one year.

There are many online sources offering to sell you an “international driver's licence” or an app that purports to be an electronic IDP. These are high-priced scams. A simple check with ICBC tells you BCAA is the authorized issuer.

If the country you are driving in requires that you have an IDP, you must present it along with your current valid driver's license when demanded by authorities.

The provisions of the Convention on Road Traffic that created the IDP do not require the signatories to recognize learner-driver permits. If you hold a learner-driver permit it would be wise to check whether it will be accepted in the countries you intend to travel in before you drive there.