Kelowna Rockets forward Andrew Cristall and defenceman Caden Price have won gold with team Canada at the 2022 Hlinka Gretzky Cup after a 4-1 win over Sweden in the finals.

Anything less than first place would have been a let down for team Canada as they dominated the competition, outscoring their opponents by a whopping total of 34 goals for and just three goals against.

Canada got on the board first, just shy of the six-minute mark when Regina Pats forward Tanner Howe found room at the side of the net, lifting the puck into the goal from a sharp angle.

Sweden tied the game with 8:03 left to play in the opening frame, but Canada got the go ahead goal before the period closed out with a power play tally from Ethan Gauthier to make it 2-1.

Calum Ritchie and Brayden yager got the last two goals for Canada, sealing the deal on their first gold medal in four years.

Cristall (1 goal, 5 assists) and Price (1 goal, 4 assists) played in all five games, both finishing the tournament with a point per game or more.

Jalen Luypen's star is on the rise.

The Kelowna native, who was passed over by the top teams throughout minor hockey, has signed his first NHL contract.

The 20-year-old centre, selected in the seventh round of the 2021 NHL draft by the Chicago Blackhawks, signed a three-year entry-level contract earlier this week.

Luypen, passed over in the 2020 draft, had a breakout season with the WHL's Edmonton Oil Kings last season.

"Jalen's overall game has made big strides over the past year, as shown by his and his team's success last season," said Blackhawks GM Kyle Davidson.

"His strong work ethic is what we're looking for in our prospects and that attitude is what will make a huge difference in the future."

Luypen, listed at five-foot-ten, 155 pounds, told Castanet News after last year's draft he was told throughout his minor hockey career he wouldn't make it.

"There's nothing that makes me happier, and makes me want to go on, than those people that tell me I can't do it. That's what drives me, that's what fuels me," Luypen said at the time.

Luypen, who has one more year of junior eligibility remaining, will likely get a shot at beginning his professional career with the Blackhawks AHL affiliate in Rockford, Ill. 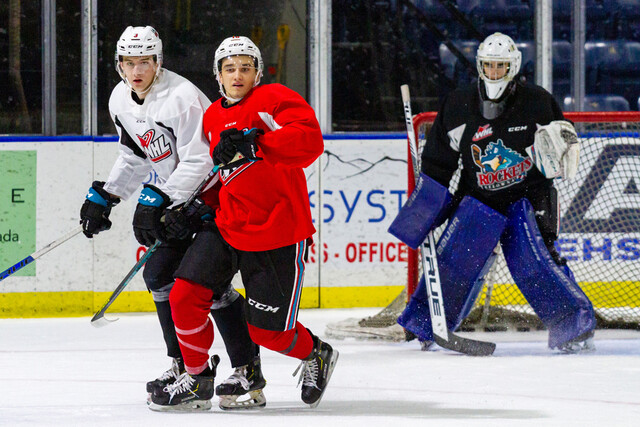 For the first time since 2019, the Kelowna Rockets will hold a complete training camp schedule.

The schedule will include a full rookie camp followed by a main camp.

The club held an abbreviated training camp prior to the shortened 2020-2021 season due to the COVID-19 pandemic.

In advance of last season, the team held only a main camp.

Rookie camp will run from Sept. 1 to 3, with the five day main camp beginning Sept. 4.

A full roster for both will be released at a later date.

The Rockets open their five-game pre season schedule in Kamloops Sept. 9, before hosting the same Blazers the following night at Prospera Place.

Czechia forward Pavel Novak may not physically be in Edmonton at the World Junior Hockey Championships, but teammate Michal Gut will make sure he is in spirit.

Gut will play in this month's tournament with specially designed sticks to show support for Novak, who is home battling cancer.

The sticks will be auctioned off with proceeds going to the Ivan Hlinka Endowment Fund.

Novak, who played two seasons with the Kelowna Rockets, was a member of the Czechia team when the world junior tournament was postponed in January, but said last month he would be stepping away from the game to deal with the cancer.

Gut and stick manufacturer True Sticks created special purple sticks to use throughout the tournament.

He said the initial intention was to send proceeds to help pay Novak's medical bills, but he declined.

They agreed to send all monies collected to the Ivan Hlinka Foundation that helps hockey players and other hockey officials facing social and economic circumstances.

“We all know what happened to our friend,” Gut, a member of the Everett Silvertips, explained to Czech media.

“I thought about it and wanted to somehow support him and help him. We have known each other since the national team and we are good friends. I write to him almost every day. I have never seen a stronger person.

"He always stays positive and handles it well. I think he will win this tough match.”

The tournament begins next Tuesday.