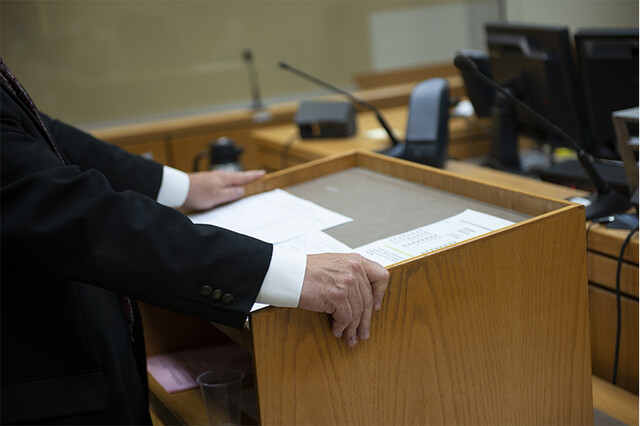 A former Oliver bank employee's lawsuit against a senior who allegedly attacked her has been dismissed due to an "inexcusable delay."

In a judgment dated August 15, 2022, B.C. Supreme Court Justice Gordon Weatherill outlined his decision, stating that the case lay dormant for too many years.

On April 9 of that year, Sabyan, then 84, entered the Royal Bank of Canada branch in Oliver where Dias worked, seeking help with document shredding.

Video surveillance captured Sabyan entering RBC. Dias claimed Sabyan then grabbed her by the throat and raised his fist as though to punch her; Sabyan claimed he only touched her on the shoulder. The angle of the video blocked their interaction.

Dias filed her civil claim in January 2016, and by October 2016, lawyers for Sabyan had responded that he has "no recollection" of the incident, did not intend assault and battery, and psychological screening indicated "the presence of some cognitive impairment, particularly in the area of memory, but also for executive functioning, planning and organizing."

In the years following, a lawyer for Dias, named in the decision only as "Mr. Lund," was allegedly frequently slow to send discovery documents to Sabyan's counsel and to file notices to proceed to trial, or respond to defence counsel.

When the pandemic began in 2020, Mr. Lund told Dias he would be in touch when the court system got going again, then did nothing on the matter for two years.

"Mr. Lund admits that he dropped the ball and blames the entire delay on 'inadvertence' and his lack of diligence in failing to appropriately prioritize the matter. He has no meaningful excuse for his failure to properly represent Ms. Dias," Weatherill wrote in his decision.

That said, he did not accept Dias' argument that everything was her lawyer's fault, after the defence filed a motion to dismiss over the delay in prosecution.

"No person acting reasonably who was anxious to have her case proceed would unquestioningly accept this kind of delay in a relatively straightforward case. Ms. Dias’ responsibility as the plaintiff included a responsibility to maintain some degree of control over the process," Weatherill wrote.

"It had to have occurred to her that Mr. Lund was ignoring her case and was mishandling the file. She had the responsibility to take action – either by giving clear instructions to Mr. Lund to proceed within a certain time, or seek other counsel, in order to protect her interests."

In the interim years since the incident, Sabyan's cognitive state grew worse. Since 2020, Sabyan, now in his early 90s, has resided in a full-time care facility requiring supervision.

"He is no longer able to recall the incident nor mount a defence at trial. He is elderly, frail and has no reliable memory," Weatherill wrote.

"The fact remains that Ms. Dias has failed to prosecute her claim for over five years during which time Mr. Sabyan’s cognitive health has declined significantly to the point that, in my view, a fair trial is no longer possible due to Mr. Sabyan’s health," Weatherill concluded.

"Had this case been prosecuted with any due dispatch, the trial could have concluded by mid-2018, before Mr. Sabyan’s significant cognitive decline."

The case was dismissed and Dias awarded no compensation.