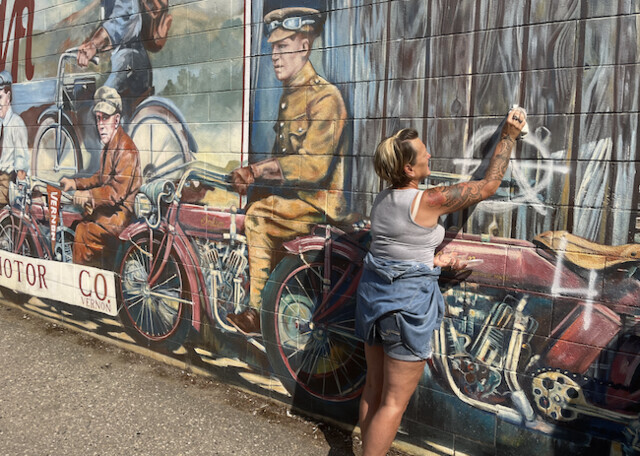 It was a busy year for Vernon's anti-graffiti team.

And a report to Vernon city council Monday will outline the amount of unwanted graffiti as well as a new trend by so call 'taggers.'

The Vernon Community Safety Office graffiti program has finished for the year and from beginning the last week of May and ending in the last week of August, the Anti-Tag Team documented 2,456 individual instances of unwanted graffiti and tagging vandalism in the city.

In many cases, there were several different tags recorded on one surface with 122 private property owners and 98 tenants being contacted in regards to vandalized properties.

City of Vernon furniture and property were documented as having been targeted in 440 locations.

The Anti-Tag Team was successful removing what they were physically able to eliminate while forwarding the balance to city operations for their attention.

A new disturbing trend in 2022 is the repeated defacement of the historic murals as well as the use of tagged stickers stuck to a variety of surfaces.

Rachael Zubick, with the Vernon Community Safety Office, said there used to be a code among street taggers that they didn't touch someone else's works of art.

“There has been a shift in mentality and that is, prior to (this year), we would not have seen many of the murals tagged ... unfortunately we have seen a change this year where we see more vandalism done to the murals than we have in previous years,” Zubick said.