Dozens of motorcycles and a few cars took off from Penticton to Kelowna Saturday morning, for a ride in memory of a local man who was shot to death in 2019.

The annual Ride in Memory of Rex Gill honours the man who was shot in a mistaken-identity case in Kamloops. The annual ride from Penticton to Kelowna delivers warm clothes and donations to the Kelowna Gospel Mission, something close to Gill’s heart.

Marie Nobles, the mother of Gill, continues to organize the event every year after helping her son with the first one in 2018.

“I'm just carrying on what he started because it's the only thing that I can do to finish a job for him. And yes, this is a very emotional day for me. And I am hoping that we get a lot today,” she said.

The fourth annual ride started from Coyote Cruises, with a bigger message to the community this year.

“It's not just about the boys. It's about awareness, awareness of our judicial system awareness for those that were in residential school and never came home because some of my family was there. Rex was Indigenous. His children have their status now. Mike, he was such a big support to me, the first couple of years before he passed away,” Nobles said.

The ride also honours Mike Courtney, who passed away in an accident after joining in the ride for Gill and heading back home in 2020.

“We need to be kinder to each other and we need more stuff like this, to remember people. remember what's happening. Be there for others, because Rex and Mike were all about that.”

Participants were encouraged to ride or drive to “help fulfill their wish to help others.” This year's proceeds will go to the Kelowna Food Bank and Gospel Mission.

Nobles said she was overwhelmed on Saturday to see everyone that came out to ride and donate. While she couldn’t ride her bike this year, she is coming up to take pictures along the way.

“We just want everybody to have awareness of what's going on in the world and how broken things are. We're doing our little bit to try and encourage people to help each other so we can fix things,” she added.

“I know that they're up there watching and going, ‘Okay mama.’ I just do the best I can.” 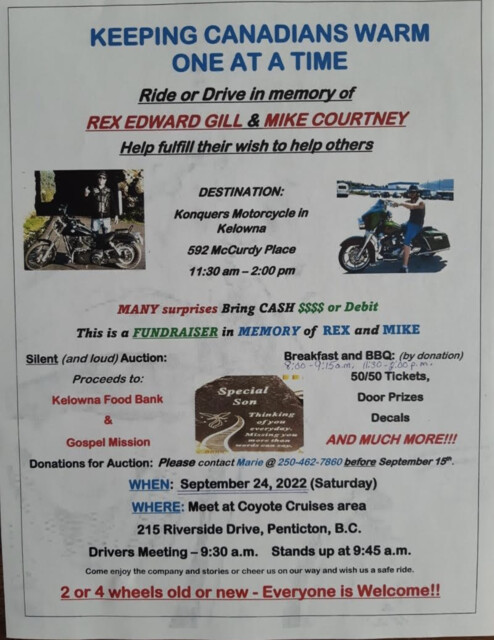