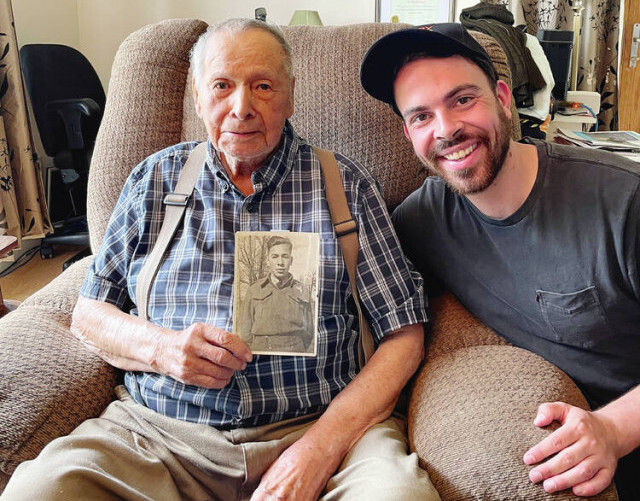 Photo: Eric Brunt
Eric Brunt with the late veteran Frank Krepps at Bernières-sur-Mer, France in June 2019, during the 75th anniversary of D-Day.

Victoria-raised filmmaker Eric Brunt wants to preserve the legacy of as many Second World War veterans as he can, a task that he considers “a huge honour.”

“I sometimes have to pinch myself,” said the Oak Bay Secondary graduate, who now lives in Montreal. “You talk to someone on the phone who’s 98 and has this incredible story. They say come on over and all of a sudden before you know it you’re being welcomed into their home and you get to spend a morning or an afternoon with them.”

Brunt, 29, was majoring in film at the University of British Columbia when his grandfather, Clifford Brunt — a Second World War veteran — died at the age of 95.

With no record of his grandfather’s war experience, Eric Brunt began thinking about other veterans’ stories that hadn’t been told. “That’s kind of what set the whole ball in motion.”

He set out from Victoria in a van in 2018 to start talking to veterans, and has since ended up compiling interviews with more than 475 of them.

Brunt said of the 1.1 million Canadians who served in the Second World War, fewer than 20,000 are still alive. Their average age is 97. “In fact, of the hundreds of interviews I’ve filmed, well over half of these veterans have since passed away.”

He said the remaining veterans “can often be found tucked away on the periphery of society they helped save, living quietly away from the limelight — and largely forgotten.”

Brunt’s work has been getting noticed. Montreal-based Melki Films Inc. has announced it is producing Brunt’s film project for the Canadian War Museum, so the Eric Brunt Collection will become part of a new digital project at the museum to be launched in late 2024.

“Before it was sort of an independent project that I was motivated to get done myself and thankfully now have found a home for it, which is pretty exciting,” said Brunt, who now has funding from the museum and Melki Films.

The museum’s acting vice-president, Dean F. Oliver, said Brunt’s work will be used in conjunction with other online tools, future exhibitions and educational products, as well.

Brunt has been been back in B.C. lately interviewing more veterans on Vancouver Island and the Lower Mainland. He plans to keep that up until the end of the month.

“The main thing right now is trying to find any veterans I’ve missed.”

He expects to drive back east in October. “I’m anticipating being done this last round of interviews by the end of January, and I’ll finish in Halifax.”

He will then set to work on the final product, while at the same time working on a feature-length film looking at the project’s highlights.

Brunt’s work has found “the perfect home” at the museum, said Viveka Melki, owner and president of Melki Films.

“So many of these first-person stories are being lost as the generation of the Second World War dies off, but Eric’s record of their experiences told to him in their intimate filmed conversations will serve as an invaluable historical record and a tribute to our veterans’ service and sacrifice.”