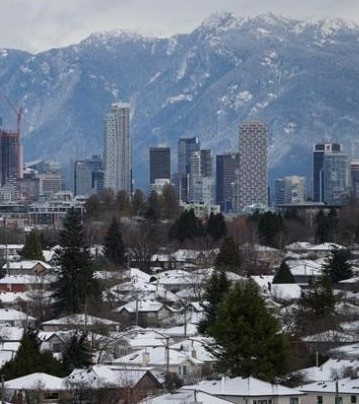 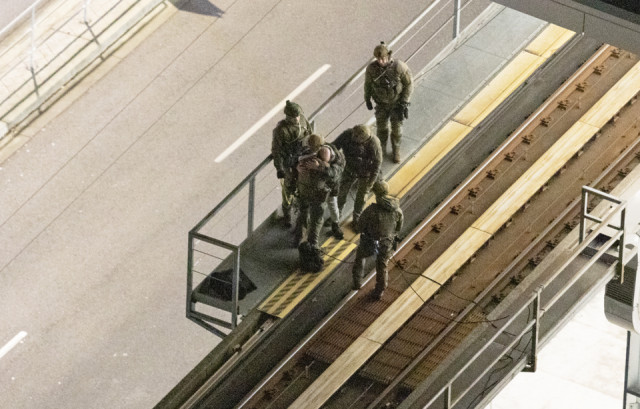 Photo: Contributed.
A photo snapped from a nearby condo tower captures the emotional end to a six-hour standoff at the Metrotown SkyTrain station on Nov. 13.

A Burnaby photographer captured the emotional end to a six-hour police standoff at the Metrotown SkyTrain station earlier this month.

The photo shows a man surrounded by five tactical officers.

He hugs one of the officers, his head resting on the officer’s shoulder.

The image was taken from a nearby condo tower by a resident who did not want his name published.

He could only watch the six-hour ordeal from a distance, not knowing the tragic circumstances that sparked it.

Officers were dispatched to the station at about 5:18 p.m. on Nov. 13, after a man jumped into the guideway and began pacing along the tracks and screaming profanities, Metro Vancouver Transit Police spokesperson Const. Amanda Steed told the NOW.

At the scene, the officers learned the man, who struggles with mental illness, had been getting support from Burnaby RCMP Const. Shaelyn Yang, who was stabbed to death last month while on a call at a local park.

Yang had been a member of Burnaby RCMP’s mental health and homeless outreach team.

“He was getting the support he needed from this officer, and she was murdered,” Steed said of the man at the Metrotown station. “Obviously, when she was killed, he didn’t have that support into the mental health section that he needed, and he just kind of spiralled. That’s why he found himself out on the tracks.”

When two male transit police officers first arrived at the scene, Steed said the man said he would only talk to a female officer he had spotted at the scene.

“She happened to be of Asian descent, and I guess he sort of felt more comfortable with someone who looked and acted like Const. Yang,” Steed said.

The female officer tried to engage the man with help from another officer at the scene who is a trained crisis negotiator, but the standoff continued to drag on.

For most of the incident, the man was precariously perched on a railing high above Central Boulevard.

The street had been shut down, as had the Metrotown, Patterson and Royal Oak SkyTrain stations.

After negotiations had gone on for several hours, police called in the Lower Mainland Integrated Emergency Response Team.

“They are highly trained in high-angle rescues,” Steed said.

The photo snapped by the Metrotown condo dweller captured the moment after the man finally allowed the tactical officers to arrest him.

“They didn’t just rush in and put him in handcuffs. They took the time to console him. That’s what you’re seeing in that picture,” Steed said.

The man was taken to an area hospital, and no charges are being considered in the case, according to Steed.

There is evidence some forms of suicide coverage are associated with a “statistically significant excess of suicide,” with the impact strongest among young people, according to a World Health Organization resource for journalists.

But the traditional absence of that type of coverage means the general public may not be aware of the jump in serious mental-health calls transit police has been called to in recent years, according to Steed.

“It’s so common now to get calls of people in the guideway. It’s shocking,” she said. “Before, it used to be so rare; now, sometimes it’s happening two or three times a day, whether that be mental health, suicide or drug-induced psychosis.”

Between 2020 and 2021, transit police saw a 24 per cent increase in mental health apprehensions.

“Even just average people are at their breaking point, and we’re getting calls for people who have no history of anything like this before,” Steed said.

Given those challenges, the call at the Metrotown station on Nov. 13 was a good example of emergency services working together to resolve a difficult situation, according to Steed.

“They were calm; they made sure the public was safe; they shut down the stations, and, more importantly, they wanted to make sure that this person got the help that they needed.”

If you or someone you know is in crisis or needs emotional support, get help using these Canadian Mental Health Association resources.