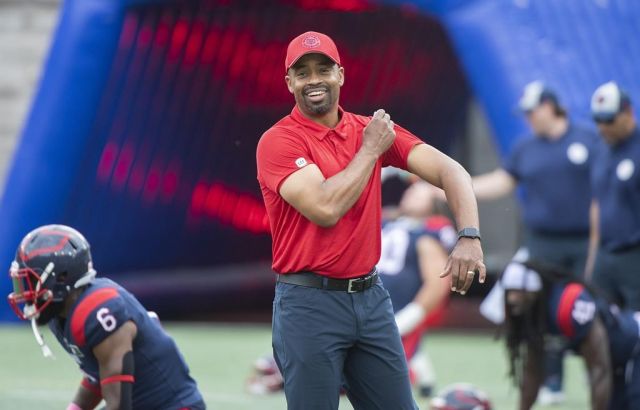 He'll also serve as an assistant to head coach Bob Dyce, who had the interim tag removed from his title on Friday.

"I’m extremely pleased to have Khari join the Redblacks family," said Dyce. "KJ is a great communicator and teacher who brings a wealth of knowledge, experience and energy to Ottawa."

Jones and Dyce were on the Roughriders coaching staff together when Saskatchewan won the 2013 Grey Cup.

"It was important to get a man of integrity like Khari to lead our offence going forward and I’m excited to work with him once again," said Dyce.

Jones was previously the head coach of the Montreal Alouettes for three seasons until he was fired in July. He then served as a football operations consultant with the Hamilton Tiger-Cats for the rest of the season.

"I’m very happy and excited to be a part of Bob Dyce’s staff in Ottawa. I have known Bob for over 20 years and I am honoured to work with him again," said Jones. "I can’t wait to help deliver a dynamic offence for RNation and help push us towards the collective goal of bringing a Grey Cup back to Ottawa."

Before his time in Montreal, Jones spent three seasons as offensive coordinator of the BC Lions, helping them to a West Final appearance in 2016.

He was also quarterbacks coach of the Saskatchewan Roughriders from 2012-2013, where he enjoyed a victory in the 101st Grey Cup. Jones initially broke into the coaching ranks with the Ticats as quarterbacks coach and offensive coordinator from 2009-2011.

Jones previously had considerable success as a player. The former quarterback earned Most Outstanding Player and CFL All-Star honours in 2001 with the Winnipeg Blue Bombers en route to a Grey Cup appearance. He was also named a CFL West All-Star in 2002.

This report by The Canadian Press was first published Dec. 3, 2022.