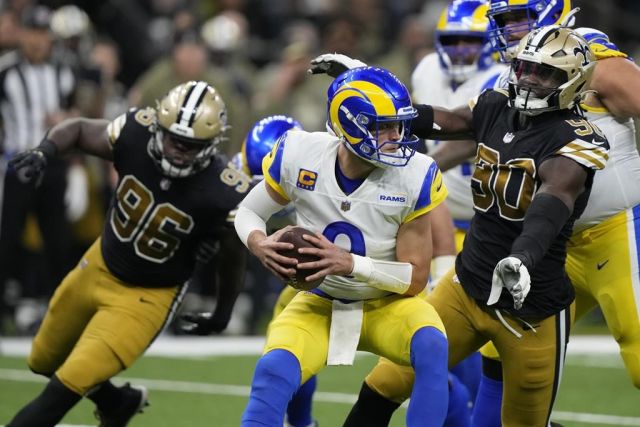 LOS ANGELES (AP) — Quarterback Matthew Stafford was placed on injured reserve by the Los Angeles Rams on Saturday, one day after he cleared the NFL's concussion protocol for the second time this season.

Stafford already had been ruled out for the Rams' home game against Seattle on Sunday due to a neck injury. The Super Bowl winner will now be sidelined for at least four games, and his season could be over.

Stafford has missed two of the past three games for the Rams (3-8), whose title defense season has fallen apart with a five-game losing streak. Although the Rams haven't confirmed Stafford had a concussion this season, he made two trips through the league's concussion protocol.

John Wolford will start at quarterback for Los Angeles against the Seahawks. All-Pro defensive tackle Aaron Donald and All-Pro receiver Cooper Kupp also are out with injuries.

Stafford felt numbness in his legs during the Rams' loss at New Orleans two weeks ago while playing just two days after clearing the concussion protocol for the first time.

After Stafford cleared the protocol again Friday, coach Sean McVay acknowledged the struggling Rams likely wouldn't rush back their 34-year-old star quarterback, who is under contract until 2026.

“You knew that he wouldn’t be available this week because of the neck,” McVay said. "So now that we’ve got one of those steps taken down, then the next thing will be, let’s put our heads together and then let’s see what that looks like as far as how the neck affects his availability, and what we’ll do for the remainder of the season.”

Stafford has passed for 2,087 yards with 10 touchdowns and eight interceptions while completing a career-high 68% of his passes in nine games this season, his second with the Rams after 12 years with the Detroit Lions. Stafford had been one of the NFL's most durable quarterbacks over the previous 11 seasons, missing just eight games — all in the 2019 season — due to injury.

Stafford, Kupp and Donald join receiver Allen Robinson, defensive tackle A'Shawn Robinson and a host of offensive linemen out with significant injuries for the Rams, who are off to their worst start since 2011 after falling into their longest skid since 2016.

The Rams also activated rookie linebacker Daniel Hardy from injured reserve. The seventh-round pick has yet to make his NFL debut after incurring a high ankle sprain during the preseason.

Hardy could play immediately as an edge rusher for the Rams, who will be without linebacker Terrell Lewis due to a back injury. Los Angeles already cut veteran edge rusher Justin Hollins earlier this month, further weakening its pass rush.