DeGrom's deal with Rangers could be worth $222M for 6 years 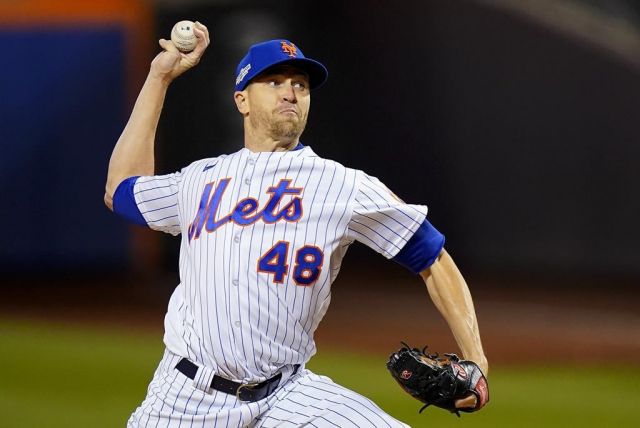 Jacob deGrom's $185 million, five-year contract with Texas includes a pair of conditional options, one that protects the Rangers against an arm injury and another that would make the deal worth $222 million over six seasons if he is remains a top pitcher at the end of 2027.

Texas has a conditional option for 2028 that would be triggered if from 2023-26 deGrom has Tommy John surgery on his right elbow or has any right elbow or shoulder injury that causes him to be on the injured list for any period of 130 consecutive days during any season or 186 days in a row during any service period.

The conditional option would be for $30 million if deGrom finishes among the top five in Cy Young voting during the contract or pitches at least 625 innings. The option price would increase to $37 million if he finishes among the top five three times or more or pitches at least 725 innings. If he falls short of those specifications, the conditional option price would be $20 million.

DeGrom's conditional option would be triggered ar $37 million if the conditional team option doesn't get met, he pitches at least 160 innings in 2027 and finishes among the top five in Cy Young voting, and an independent doctor examines him and determines he is more likely than not to be healthy for the start of the 2028 season.

DeGrom would get a $150,000 bonus for winning the World Series MVP award and $100,000 for All-Star election or selection, winning a Gold Glove or a League Championship Series MVP Award.

He has the right to buy six of the best available premium seats for all home games and agrees to make a $150,000 annual charitable contribution.