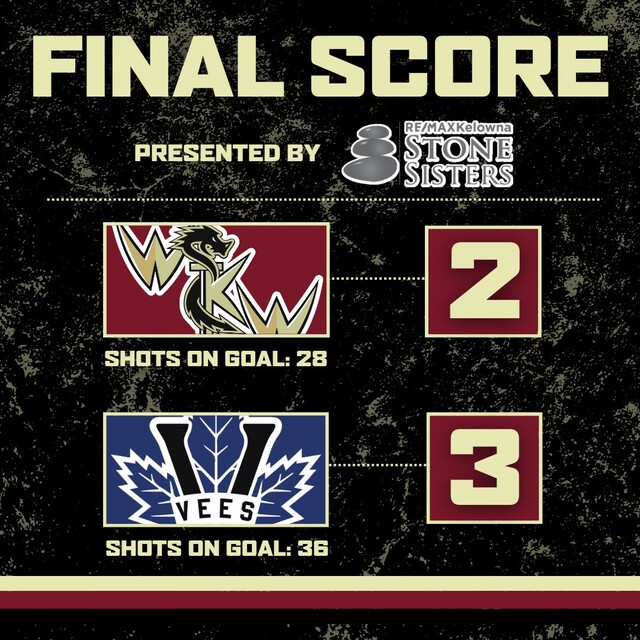 The Penticton Vees season opening winning streak now stands at 24 games - but this one wasn't easy.

The West Kelowna Warriors staked themselves to a 2-0 lead after 40 minutes, but were unable to hold off the Vees over the final 20 minutes.

Bradley Nadeau scored 11 minutes into the third on a power play to tie it, then brother Josh ended it 51 seconds into overtime as the Vees edged the Warriors 3-2.

The nearly 3,500 in attendance had to wait until early in the third period to relieve themselves of their stuffed animals during the Vees annual Teddy Bear Toss night.

Dylan Brooks notched his fourth of the season to get the Warriors on the board midway through the opening period.

Eight minutes into the second, Rylee Hlusiak doubled the lead when he went hard to the net off the right win and beat Luca Di Pasquo to the blocker side.

The Vees, held to just 17 shots over the first 40 minutes pushed back hard over the final 20, peppering Angelo Zol with 18 shots.

They finally got to the Warriors rookie three minutes in when Dovar Tinling found a loose puck behind Zol and slid it into the open net.

The Warriors, who picked up three of a possible four points over the weekend, host Prince George Wednesday to kick off a tough five day stretch.

Following Wednesday's tilt with the Spruce Kings the warriors hit the road for games in Cranbrook Friday, Trail Saturday and Wenatchee Sunday.