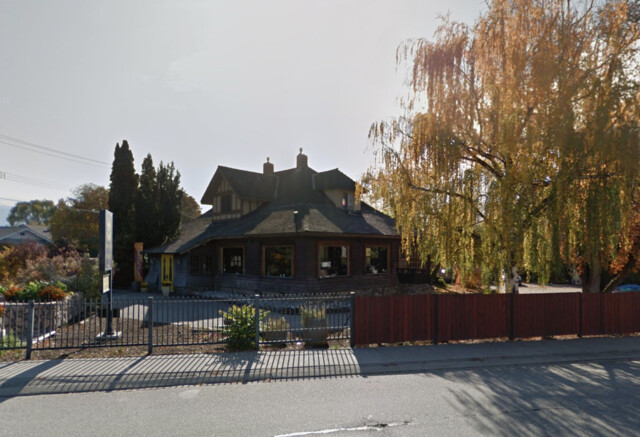 A building setback amendment that paves the way for replacing the house that Bogner's Restaurant calls home with an office building has been green lit by city council.

City council voted in favour of allowing a variance to let the owner of 302 Eckhardt Avenue move forward with a proposed three-storey commercial building on the property. That vision will require demolition or removal of the home currently on site, which while not a registered historic landmark, has sentimental value to the community.

Council members briefly discussed the matter, with some expressing their hesitation.

"I'm going to vote for the staff recommendation but with reluctance, and the reason is that the zoning does allow for this," said Coun. Amelia Boultbee.

"One of the alternatives provided, which would be to have the city take over and designate it a heritage site, could entail significant cost to the taxpayer."

Couns. James Miller and Ryan Graham voted agains the motion, but the majority carried it, approving the requested setback zoning variance and the associated development permit.

A beloved local restaurant's building could be replaced by a commercial building if a new development making its Penticton city council debut Tuesday goes ahead.

The owner of 302 Eckhardt Avenue West wants to develop the wedge-shaped slice of land that houses Bogner's of Penticton into a three-storey office building, seeking permission from council for appropriate re-zoning.

Bogner's is housed in a detached Tudor-style single-family home, allowed to operate as a business due to a Land Use Contract from the 1970s. Prior to that, it was a residential care home.

The restaurant has racked up accolades and local love over the years, though it has recently scaled back operations to catering and pre-planned private events.

In a report that will be presented to council Tuesday afternoon, city staff note that while "the building and its historic use are notable, the property is not currently listed on the City of Penticton Heritage Registry."

Council will be asked to approve a development variance permit allowing the owner to reduce the minimum front yard setback to facilitate the development, and issue a development permit.

"The proposed development has been designed with the [Official Community Plan] policies and guidelines in mind and is a project providing new commercial space on a main corridor into the city centre, while being courteous in scale to the surrounding neighbours," the staff report reads.