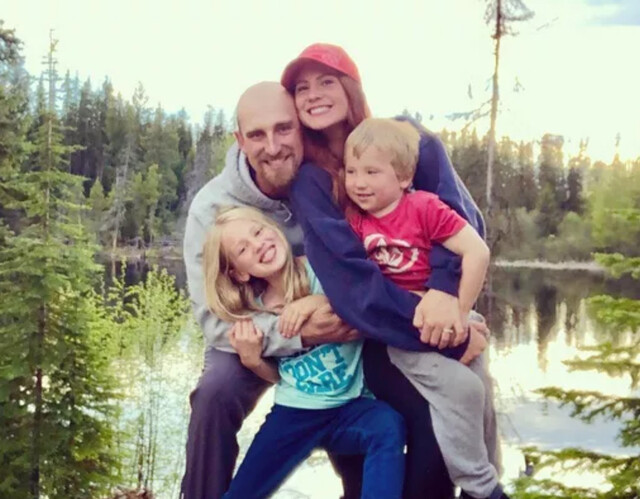 Brady and Chrissy Loseth are living every parent's worst nightmare — having to bury their child far too soon.

Now, the West Kelowna couple are left with more questions than answers after their nine-year-old daughter Ayla died in Kelowna General Hospital a week ago.

What the Loseths were led to believe for 48 hours was a bad case of influenza turned out to be much worse.

The Loseths told Castanet News Ayla had the flu and strep throat which became septic, poisoning her blood, leading to her death in the early hours of Tuesday, Nov. 29.

They believe the symptoms she exhibited the previous Saturday, Nov. 26, a severe rash all over her body, dehydration, fever, nausea and lethargy pointed to something more that the flu.

"She was visibly very, very sick. She was passed out in the waiting room and I kept telling the nurses she needs to be on an IV, she's really dehydrated and can't keep anything down," Chrissy said, describing their visit to the KGH emergency department on Nov. 26.

Ayla was eventually taken into a room, hooked up to an IV and given something to calm nausea.

She says when they finally saw a doctor, he said Ayla was experiencing symptoms of the flu. "We need to get some fluids in her and she'll be OK," Chrissy recalled.

"I knew it wasn't because Ayla had the really awful rash that looked like a sunburn," she said.

"I said I didn't think it was influenza, I think it's bacterial and I think we should do a strep test on her."

She was given strep and influenza tests, results of which wouldn't be known for a few days. Results of a urine test also came back showing proteins in the urine which Chrissy says the doctor explained as likely due to dehydration.

"They didn't do anything else...they didn't take a blood sample or anything. They didn't put her on antibiotics," she said, something she believes could have saved her daughter's life.

After some improvement Saturday (Nov. 26) night, the Loseths say Ayla got significantly worse overnight. Her rash got worse, she had swelling around her eyes and joints and her fever was high.

They didn't go to the hospital Sunday on advice from doctors the previous day, but returned Monday (Nov. 28) morning when symptoms didn't improve.

Chrissy says they saw a pediatrician about 2:30 p.m. Monday who told them it was just the flu, but two hours later learned test results taken two days earlier confirmed strep. She had also tested positive for the flu.

"That's when they finally started the antibiotics," Chrissy said.

They weren't telling us much, just that Ayla was really sick and they didn't have the resources and staff to treat her properly, so they had to send her to Vancouver Children's Hospital."

"They said they were going to airlift out that evening, but we still didn't know how bad it was."

The Loseths found out how bad it was when a second pediatrician came in and overruled the first doctor. "She took one look at Ayla and said 'this is wrong, we need to rush her into ICU immediately.'"

At that point, she says the attitude changed from nonchalant to all hands on deck.

"It was complete chaos."

"She was too sick. We did not know she went septic, we had no idea," said Chrissy.

"We didn't know how serious it was. To be honest with you, we are so disturbed with the level of urgency given to Ayla until it was too late."

"They waited too long for her to get treated," said Brady Loseth. "There was misdiagnosis and just not enough urgency."

Chrissy says while she acknowledges what happened to Ayla was rare, professionals she has spoken with at KGH said antibiotics should have been prescribed Saturday, not Monday afternoon when it was too late.

"We wish the signs had been caught earlier. To get sent home was defeating because we really couldn't help her," added Brady. "The other pediatrician came on and knew right away. She took the time and saw the signs. She diagnosed Ayla had gone septic."

The Loseths say KGH has launched an internal investigation, which they will be a part of.

"We will be sitting with the director and the team that worked on Ayla to discuss what steps were taken and their findings," said Chrissy. "We have questions. We need the documentation. We are going to be talking with all of them."

"We are not professionals. We put the life of our child in their hands and we just want other parents to know to look for symptoms and if you have to be, be proactive."

Brady says their five-year-old son also showed some of the same symptoms as his sister. He says they went into emergency the day after Ayla passed away and he was given antibiotics even before he was tested

"They could have done the same with Ayla. We don't know, but it could have been different," he said.

An autopsy was performed on Monday.

A public memorial service for Ayla Loseth will be held Friday at 11 a.m. at Trinity Baptist Church on Springfield Road.

A GoFundMe campaign has been launched to help the family through their loss. It has raised nearly $70,000.