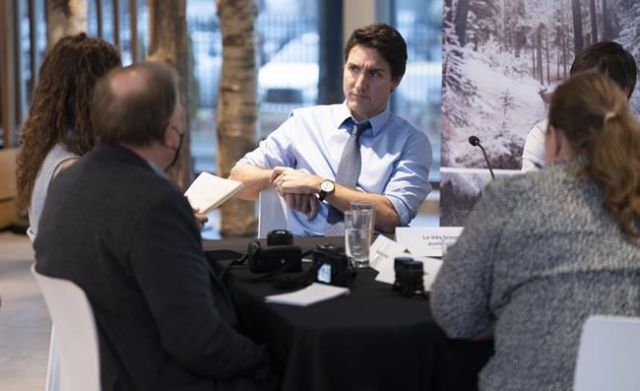 Photo: The Canadian Press
Prime Minister Justin Trudeau listens to a question from environment journalists during a round table discussion in Montreal on Wednesday, December 7, 2022. Trudeau says he believes at least 120 countries are now on board the COP15 nature summit target to protect nearly one-third of land and marine coastlines by 2030.THE CANADIAN PRESS/Paul Chiasson

As negotiations officially began at the COP15 UN nature talks in Montreal Wednesday, Prime Minister Justin Trudeau said almost two-thirds of the countries at the table have already agreed to protect 30 per cent of the world's land and water by the end of the decade.

But he said the negotiations with some of the five biggest countries in the world, including Russia and China, pose a diplomatic and political challenge.

"International relations are complicated," said Trudeau during an interview with reporters on the sidelines of the COP15 negotiations.

"But like I said yesterday, if we can't come together and say, 'yeah, we should probably protect nature … then what can we come together on?"

COP15 is the negotiations of all 196 parties to the UN convention on biodiversity that was first drafted in 1992. The convention is to nature, including habitats and all wild species, what the climate change convention is to global warming.

The discussions in Montreal — which have been delayed two years because of COVID-19 — are meant to draft a new biodiversity plan that would halt and restore natural habitats and wild species that have been damaged or are in decline mainly due to human activities.

The UN assessed in 2019 that one-quarter of animal and plant species in the world are at risk of extinction by 2100. It also said three-quarters of land-based ecosystems and two-thirds of marine environments had been "significantly" changed by human actions, including agricultural and industrial expansions, consumption patterns and population growth.

When it comes to protecting nature, size matters. The five biggest countries by land mass — Russia, Canada, China, the United States and Brazil — are home to more than half the world's forested lands. Russia alone has one-fifth of it.

Environment Minister Steven Guilbeault made the point that 30 per cent of Canada's land mass is equivalent to the entirety of every country in the European Union.

Losing forests, wetlands, grasslands, and damage to coastlines and pollution in marine areas, all negatively affect the harmony of biodiversity humans depend on for everything from clean air and water to food security and a safe climate.

At the moment, Canada is the only one of the five clearly on board the 30-by-30 goal. The U.S. isn't even a signatory to the biodiversity convention so isn't officially at the table.

Brazil just elected a new government to be led by president-elect Luiz Inácio “Lula” da Silva. While Lula, as he is known, has clearly promised to restore protections for the Amazon rainforest that were lost under his predecessor, his government doesn't get sworn in until January. It still faces a divided country over the balance between economic development and protecting the environment.

China is officially hosting the event, though it was decided in June to move the meeting to Montreal from China because of the latter's ongoing pandemic restrictions.

As president of COP15, China helps set the agenda and oversees the negotiations. But Trudeau said Canada agreed to host the meeting on short notice, with the caveat that while China would remain the official host, the meeting would be held on Canada's terms, including allowing protests and divergent opinions.

But beyond protest, Trudeau said Canada wanted to push the negotiations to go further than China was.

When other countries asked Canada to please take on the hosting duties, Guilbeault said only if they supported and helped push others to back the "30 by 30" target.

China has indicated it is looking to protect 30 per cent of its own land by 2030, but it's less clear how intent it is to push the rest of the world to agree. Its decision, for example, not to invite world leaders to help ramp up the pressure at this meeting, is seen possibly as a sign China may be trying to downplay the whole thing.

The other wild card is Russia. Trudeau said Canada has had some constructive discussions with Russia on protecting the Arctic but that was before Russia invaded Ukraine.

"To be honest, how well that is holding at this particular moment, given what they've done in violation of the UN Charter of so much, and just the general negativity they're having remains to be seen," he said.

Russia tried to block some negotiations that were proceeding to include gender equity in the framework, though they seemed to be unsuccessful. The gender language was the only one that entered the final talks today without brackets around it. Brackets indicate there isn't yet agreement of all parties to the wording.

"They are showing that they're just a disruptive force,' said Trudeau.

"But it's a UN conference. Everyone gets to show up and everyone gets to share their opinions. We just have to make sure they don't get to push the kind of chaos that is their modus operandi right now."