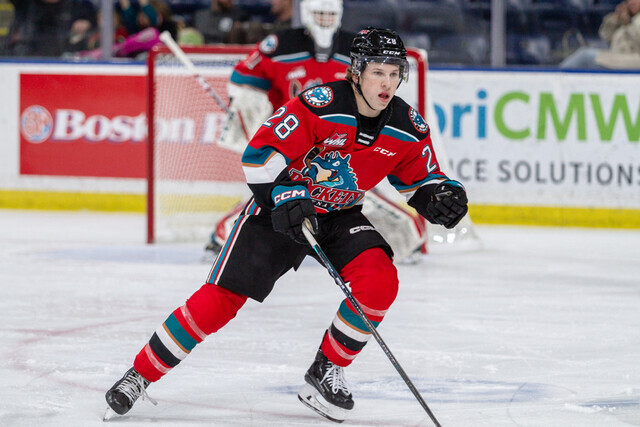 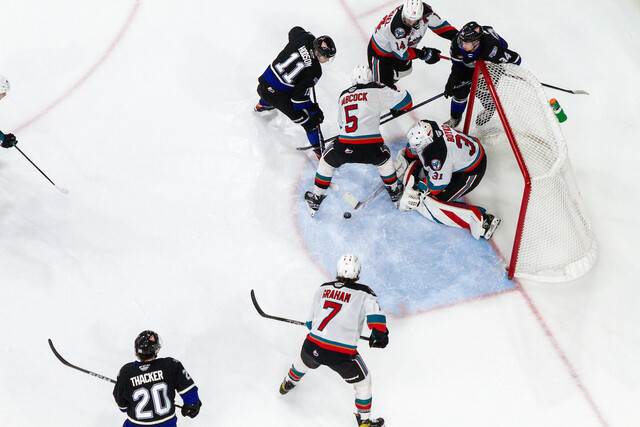 The Kelowna Rockets continue to tumble down the Western Conference standings.

Sunday, the Rockets saw their post-Christmas record fall to 2-11 in an uninspiring 5-1 defeat at the hands of the charging Victoria Royals.

Victoria's win moved them into a tie with the Rockets for the eighth and final playoff spot in the west.

It was the third game in as many days for the Rockets, but the Royals, who had to travel overnight from Spokane were facing the same scenario.

"They came as advertised. The first goal they got was what they do...they throw a puck into the neutral zone, get a good bounce, hoping a guy is cheating on the wrong side of it and sure enough that happened.

"Then our inability to play physical to stop the play while a team is skating circles around us."

The game was even until late in the first when the Royals scored three times in a span of three minutes and 10 seconds.

Teydon Trembecky skated onto a loose puck down the right wing and beat Talyn Boyko with a rising shot from the bottom of the right circle.

Marcus Almquist from the slot with what proved to be the winner, and Robin Sapoursek 62 seconds later with a backdoor one-timer gave the Royals a 3-0 lead after 20 minutes.

There was no urgency in the Rockets game in the second period when they threw just five shots toward Braden Holt, or in the third when they were down five and managed just four shots.

Defenceman Jackson DeSouza spoiled Holt's shutout bid with his fifth of the season with three minutes left and the Rockets putting forth their most sustained pressure of the night.

Despite their recent troubles, Mallette says he remains positive the team will pull out of it.

"I'm not giving up on our group by any means

"We made some progress. Obviously we would have loved to have had two or three of these wins this weekend, but our group will be OK, we're going to get there.

"It's going to take some work and we're going to have to get back to it."

The Rockets are now off until the weekend when they again face the Vancouver Giants in back-to-back games Friday in Langley and Saturday back at Prospera Place.


Rockets dropped their eighth in nine games at home Saturday 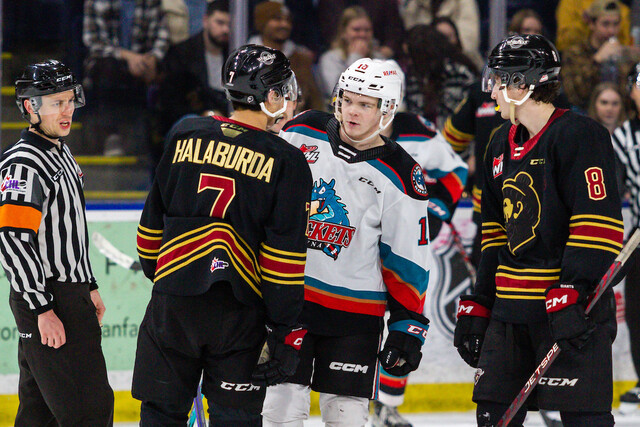 Turnovers. They're great after dinner but not so much on the giving end of a hockey game.

The game was deadlocked at 1-1 after 20 minutes, but a sloppy second allowed the Giants to take all the momentum and a 2-1 lead they would not relinquish.

"We gave them momentum and never got it back. We had a push at the end, but it's a 60 minute game. The decisions we made with the puck played right into their hands"

The Rockets got off to a great start. While shorthanded, Turner McMillen stole the puck at his own blueline, streaked down the ice and deked Brett Mirwald to the backhand.

Matthew Edwards got that one back a minute later when he intercepted a clearing pass in the slot and sent a quick shot off the post and in behind Talyn Boyko.

Ty Halaburda put the Giants up for good on a second period power play when a clearing attempt found his stick in the low slot.

Connor Dale got another gift six minutes into the third picking off an attempt to clear around the end boards. He took the puck to the front of the net and banked a shot off a Rocket skate and in.

Adam Kydd scored a pair of goals in the third, the first a diving swipe at a loose puck near the edge of the crease and another when he tapped home a rebound after Carson Golder crashed the net off the right wing.

Those were sandwiched around a power play goal from Ty Thorpe.

The Rockets had a chance to get the equalizer with a two-man advantage for 50 seconds, but were unable to generate any good scoring chances.

Mallette said the Giants didn't do anything special, they just made the Rockets have to go through them, which they were unable to do.

"To have the effort we had tonight compared to last night and the execution that we had last night...it's just junior hockey.

"It makes a coach go crazy because we were so much better in all facets last night and tonight in front of our home crowd we just didn't get it done.

The Rockets finished 0-4 with the man advantage while the Giants went 2-4.

The Rockets will host Jake Poole and the Royals Sunday afternoon at 4 to close out a three game weekend.

Poole is one of two former Rockets who lead their respective teams in scoring. He comes into Sunday with 24 goals and 50 points.

Trevor Wong, who was dealt to Saskatoon in the Colton Dach trade, leads the Blades with 55 points. Saskatoon will make their lone trek into Kelowna Feb. 11. 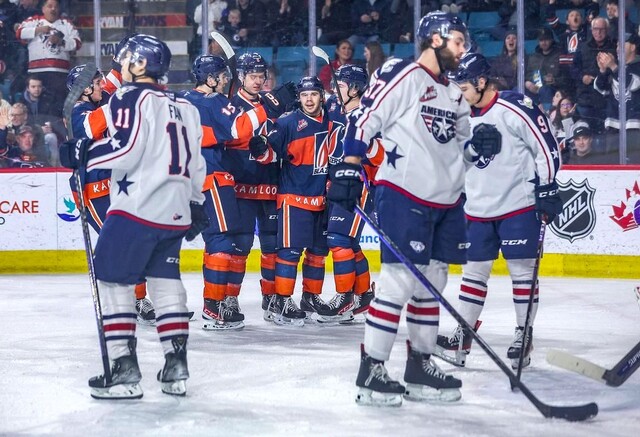 The Americans led 3-1 after 40 minutes but the Blazers had it tied up by the midway point of the third. Tri-City scored two quick ones to regain a two-goal lead, but Zellweger and Stankoven scored power-play goals a minute apart late in the third to tie the game 5-5.

Stankoven scored the winner at 2:47 of overtime.

Matthew Kieper made 32 saves on 37 shots to earn the win in net. Ams’ goalie Nick Avakyan stopped 45 of 51 Kamloops shots in a losing effort.

The Blazers scored three times on seven power-play opportunities. The Americans scored once on five chances.

Announced attendance at Sandman Centre was 5,129 — the club’s third consecutive home game with a crowd of more than 5,000.

The win moves the Blazers to 26-9-4-2, still tops in the WHL’s B.C. Division and second in the Western Conference, eight points behind the first-place Seattle Thunderbirds (32-7-1-1), who were victorious on Saturday night. With the overtime loss, the Americans fall to 20-16-4-1.

The Blazers will have the week off before heading to Vancouver Island for a pair against the Victoria Royals (12-26-4-1) on Friday and Saturday. Their next home game will be on Feb. 1, when the Portland Winterhawks (30-8-2-1) visit Sandman Centre.