While nine new cases of COVID-19 were discovered in the Interior Health region over the past four days, active cases in the area actually dropped by five since Friday.

With 14 recoveries, there are now 15 active cases within the IH region, but none of these cases currently require hospitalization.

There remains no active cases connected to the Okanagan Correctional Centre staff outbreak, which infected seven people, and there continues to be no IH residents who've contracted the virus from the Teck Coal Mine outbreak.

Since Friday, 429 new cases of COVID-19 have been confirmed in British Columbia, including nine from the Interior Health region, prompting a tightening of restaurant and bar rules by Dr. Bonnie Henry.

The new cases, which come over four separate reporting periods, bring the total positive tests in the province to 6,591, while active cases are now at 1,386. This is the highest number of active cases B.C. has seen since the pandemic started, and close to double the previous peak of active cases back in early May.

Of these active cases, 32 people are hospitalized with the disease, while 12 are being treated in critical care.

Another two people have died from COVID-19, in the Vancouver Coastal and Fraser Health regions, bringing the total number of deaths to 211.

More than 18,000 British Columbians were tested for the virus over the past weekend.

Due to the steadily increasing number of cases in the province, Provincial Health Officer Dr. Bonnie Henry issues a new public health order, forcing the immediate closure of all nightclubs and banquet halls in B.C.

Additionally, liquor sales at bars and restaurants must now stop by 10 p.m., and close by 11 p.m., unless full meal service is being provided. But even if food continues to be sold in restaurants after 11 p.m., liquor sales will not be permitted.

Additionally, new rules will limit the volume of music and TVs in bars and restaurants to below that of normal conversation. 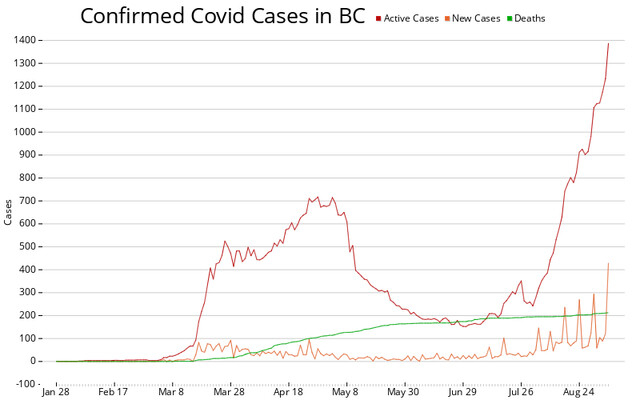