Drivers to receive $110 rebate through ICBC to offset gas prices 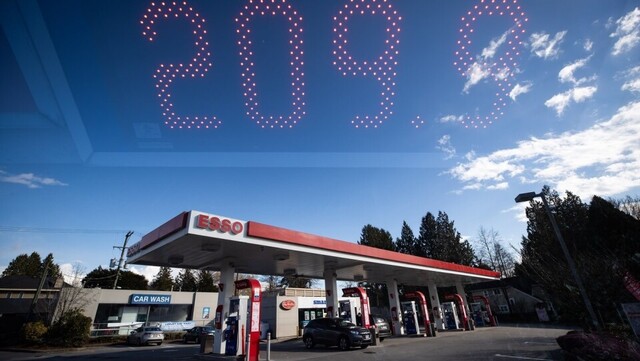 Photo: The Canadian Press
In this double exposure photograph, a sign displays the price of a litre of regular-grade gasoline as people fuel up their vehicles at an Esso gas station in Vancouver on March 8.

The provincial government is raiding the surplus at ICBC to provide rebates to drivers to offset skyrocketing gas prices.

One-time rebates of $110 for personal drivers and $165 for commercial drivers will start to go out to drivers starting in May. In total, $395M worth of rebates are being distributed.

Premier John Horgan said the “robust” financial position of ICBC, following the shift to no-fault insurance, has made the driver kick back possible.

“We brought in legislation to prevent future governments from dipping into reserves at ICBC to pad their budgets. What we're doing here and … for the two previous COVID benefits, is giving money back to the policyholders, to people who finance ICBC,” he said.

Horgan said the rapid rise in gas prices is directly the result of the war in Ukraine.

The Premier said they opted for a rebate rather than direct tax relief at the pumps due to the advice of “UBC economists” that said tax relief would be replaced by a price increase by retailers.

He claimed Alberta’s reduction in gas taxes would equate to just $5 in savings a week for drivers.

Prior to the rise in gas prices there was already a discussion taking place about what the government should do with ICBC’s profits. Horgan was asked if that means the insurance provider is overcharging.

“It isn’t about too many policy dollars in the pot,” Horgan said. “It was about having a positive year end as a result of investments that the corporation makes on behalf of policyholders.”

It was also suggested ICBC could afford a rebate as large as $125, but Horgan says the government is moving cautiously due to the massive drag the corporation previously had on the province’s bottom line.