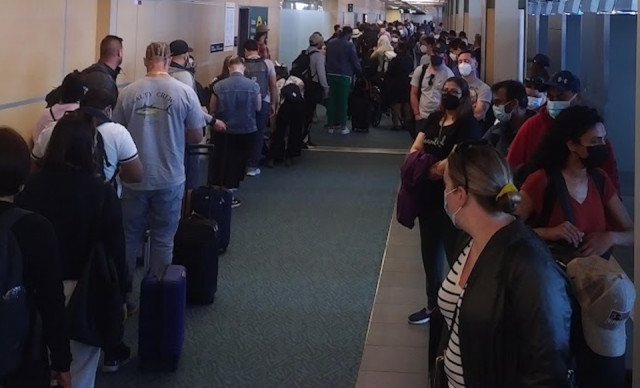 If you've been pumping the brakes on planning your next trip outside of the country, you are far from alone.

Amid soaring gas prices and rampant inflation, many British Columbians are rethinking their travel plans.

Flight cancellations, delays, and long lineups have 53 per cent of Canadian respondents concerned about airport travel, according to a new poll.

More than half of Canadians who took the survey said they plan to travel within their own province, and another 28 per cent said they will travel within Canada. Just over a quarter said they'll be heading abroad, with 16 per cent of travellers going to the U.S.

But it isn't only high prices that are keeping residents of the Great White North at home this year.

While it has been difficult to travel over the past two years, the industry has been overwhelmed with an influx of travellers eager to return to the skies as border measures are relaxed in Canada and around the world.

Bernie Hensel shared a photograph at YVR of a two-hour line-up he waited in before he got through U.S. Customs.

One traveller said low-budget airline Swoop sent him an email informing him his flight was cancelled. They sent him a follow-up one that stated he could re-book his flight with WestJet, however, when he called the airline he was told the email was "sent in error."

Another flyer says Flair Airlines cancelled his flight with "no notification" but that he still received a text saying that it was time to check in for his flight. However, when he looked it said his trip was cancelled.

After he called the airline, he writes in a tweet that the "agent realized something went wrong" and rebooked him on new flights for free.

A Vancouver woman says her husband was supposed to fly to Halifax for business but Air Canada cancelled one of his flights the day before he was scheduled to leave.

After Air Canada cancelled his flight, moved it to another day, and then delayed his rebooked flight, an exasperated local traveller writes: "Air Canada is after my life man."

Air passengers have also expressed difficulty recouping losses on flights that have been cancelled, too.

One woman tweeted that Air Canada told her that she couldn't recoup money on a cancelled flight because it was outside of the airline's control but her friend was provided compensation for the same flight.

"Please explain yourselves. I’ll be escalating this," she wrote.