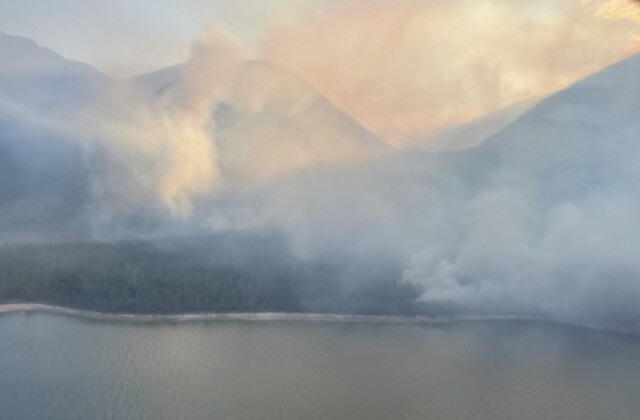 A fire burning near the north end of Kootenay Lake grew yesterday due to strong winds, causing an expansion of the evacuation alert in the small communities in the area.

The Fry Creek wildfire is burning an estimated 150 hectares on the east side of Kootenay Lake, about 15 kilometres northeast of Kaslo.

The fire was sparked by lightning back on Aug. 25, where it burned in “steep and unworkable terrain that posed significant safety risks that was too unsafe for crews and aviation resources to work on at the time,” according to the BC Wildfire Service.

Wednesday, gusting winds caused significant growth on the fire, and the Regional District of Central Kootenay issued an evacuation alert Thursday for the Birchdale and Fry Creek communities.

BCWS personnel attended the scene in the air Thursday to plan suppression action. Airtankers were called in to lay retardant on the south flank of the fire.

Early Friday morning, high winds drove the fire to the north side of the Fry Creek drainage, and the regional district extended the evacuation alert to include part of the community of Johnsons Landing south of Gar Creek.

The small communities on the east side of Kootenay Lake are accessed by boat only.

“Airtankers and a skimmer group are en route to the area to cool fire behaviour and slow the spread. Ground personnel are working on creating defensible lines that can be safely worked from,” the BC Wildfire Service said Friday.

Eighteen BCWS firefighters are working on the fire, with support from three helicopters.

As a result of the recent growth, the BCWS is now classified as a “fire of note.”