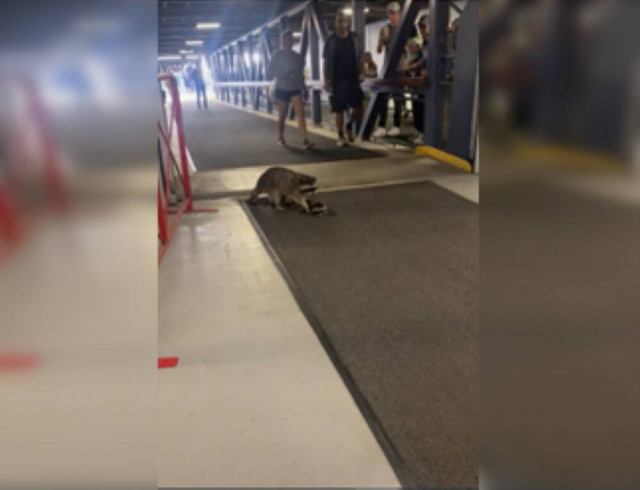 A baby raccoon helplessly slumps on the ground. Its mother climbs down a nearby pole and hovers over the young one.

A growing contingent of onlookers watch and record the incident on their phones.

A seemingly unaware SeaBus passenger trudges forward on track to crush the baby raccoon – but its fast-acting mother pulls it to safety at the last second.

A video capturing these events was posted to TikTok on Monday, and has since been viewed 2.5 million times.

In a caption, user @cynthiarobbyn said the baby raccoon dropped down beside her from above, and it seemed the animal “just knocked the wind out of themselves.”

@cynthiarobbyn Walking toward the Sea Bus a baby raccoon dropped down beside me from above & for a bit I thought they were really hurt. Seems s/he just knocked the wind out of themselves. Then s/he began to cry…sounding much like a human baby. Momma to the rescue though. ?? I kept my distance but stuck around not sure what to do as people were walking by. I felt okay to leave when workers asked people to keep the area clear & move along. How frightening for these animals. #seabus #northvancouver #racoon ? original sound - Cyn

“Then s/he began to cry…sounding much like a human baby,” the post continues. “Momma to the rescue though.”

“I kept my distance but stuck around not sure what to do as people were walking by,” the user wrote, adding they felt OK to leave when workers asked people to keep the area clear and move along.

In subsequent posts, the user explained that it appeared the baby raccoon was just scared, not seriously injured.

That theory is supported by Critter Care Wildlife Society. Operations manager Brandon Dean said his team wasn’t notified of this incident, but he spoke with the rest of his staff and has “high hopes” that the little one is OK.

While it’s hard to say for sure from the video, and it’s unclear how far it fell, “if it was in an amount of pain, it would be squawking, it would be in distress,” Dean said.

“Raccoons are very agile critters – they can tolerate a lot,” he continued, adding that the mother was doing her job by hovering over the baby.

Dean said their nest is likely nearby and there are lots of food sources in the area, with the market and numerous restaurants at Lonsdale Quay.