A timeline of the avalanche hazard in B.C., where five people are dead 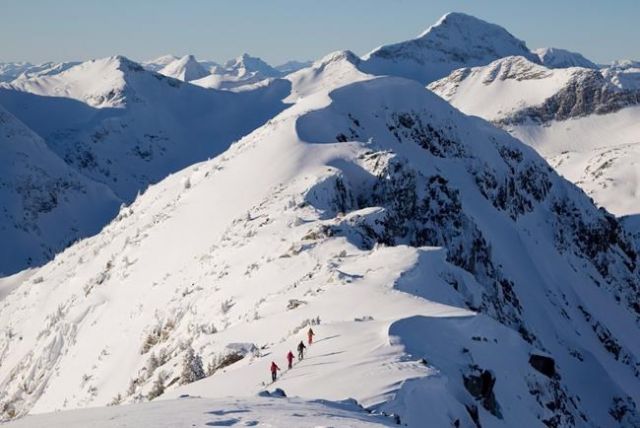 Photo: The Canadian Press
Backcountry skiers are dwarfed by the mountains as they make their way along a mountain ridge near McGillivray Pass Lodge located in the southern Chilcotin Mountains of British Columbia, Tuesday, Jan. 10, 2012. Five people have been killed in British Columbia avalanches this month. Forecasters have compared this season’s snowpack with the conditions of 2003, one of the worst years on record for fatalities. THE CANADIAN PRESS/Jonathan Hayward

Five people have been killed in British Columbia avalanches this month. Forecasters have compared this season’s snowpack with the conditions of 2003, one of the worst years on record for fatalities.

Here is a timeline of avalanche events this season:

Dec. 31: A skier suffers life-threatening injuries in a slide near Emerald Lake in southeast B.C., near the Alberta border, Avalanche Canada says in a report.

Jan. 21: Nolet dies of his injuries in hospital.

Jan. 21: Two snowmobilers riding at the base of a slope near Valemount, B.C., accidentally trigger an avalanche from above, sending a slab of snow onto one rider while the other escapes. The buried rider is found unresponsive and dies.

Jan. 23: Heli-skiers and their guide are caught in an avalanche near Revelstoke, B.C. The two guests are dug out of the snow unresponsive and are both declared dead in hospital. The guide is taken to hospital in stable condition.

Jan. 23: A slide comes down on a one person near Cherryville, B.C. Emergency health services says the person is taken to hospital with undetermined injuries.

Jan. 24: Brothers and American businessmen Jonathan and Timothy Kingsley are identified by Pennsylvania-based Kinsley Construction as the victims of the slide near Revelstoke on Jan. 23.