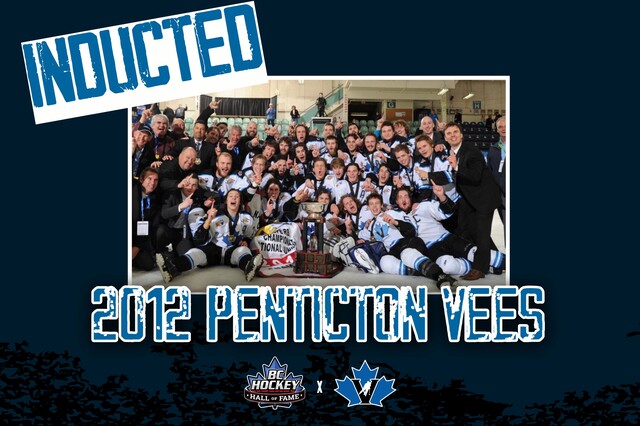 The BC Hockey Hall of Fame will hold its first induction ceremony since 2019, bringing back the ceremony after the pandemic with a celebration for a local honouree.

The 2012 National Champion Penticton Vees will be recognized on Friday, July 22 at the South Okanagan Events Centre for their season which became one for the history books.

The team managed to break numerous records en route to a 54-4-0-2 regular season before dropping just three games in the playoffs. The Vees won 42 consecutive games, a Canadian Junior Hockey League record, as well as setting the record for most wins (54), points (110) and highest winning percentage (.917) in BCHL history.

Many of the players on the roster of the 2012 club went on to play pro hockey while forward Steven Fogarty and defensemen Troy Stetcher and Mike Reilly have all played games in the National Hockey League.

“Every championship team has a unique story behind it,” President, General Manager and Head Coach Fred Harbinson said in a press release. “The 2012 team created so many story lines while breaking many of Junior hockey’s records along the away. It will be great for the fans of Penticton to have a chance to see that group of players come back for what should be an outstanding weekend.”

The event has tickets available for purchase at the Valley First Box Office at the SOEC as well as online at valleyfirsttix.com priced at $75.