Penticton Vees dominate over Trail 7-1 in the home opener 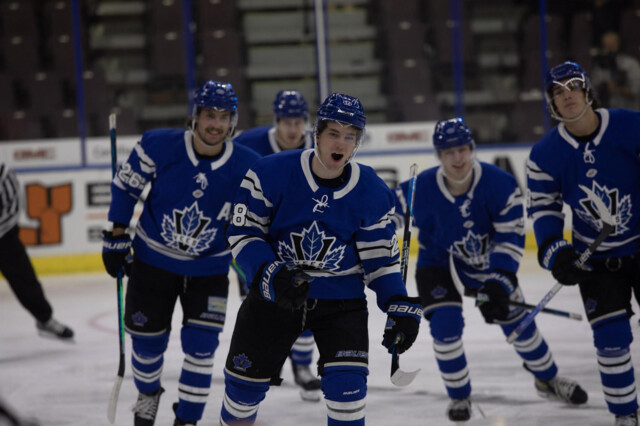 The Penticton Vees won their home opener on Friday against the Trail Smoke Eaters in front of nearly 3000 fans at the South Okanagan Events Centre, with a 7-1 score.

The pre-game ceremony started with raising four more banners to the SOEC rafters, including their 2022 Fred Page Cup championship.

Brett Moravec scored not only the Vees’ first goal of the season but the first goal across the entire BCHL just two minutes into the season.

Moravec was followed up by a goal from Josh Nadeau in the opening frame, to put the Vees up 2-0 in the final minute of the first period.

When the Vees were handed a seven-minute power play in the second, Penticton took the chance to score twice.

The Vees had another power play advantage in the final minute of the second period and scored again.

Callum Arnott scored with just eight seconds left after Ben Brunette tossed a backdoor pass to him to make it into an open net to make it 5-0.

In the final frame, Dovar Tinling made it 6-0 after a great cross-ice pass by Bradly Nadeau.

Trail ended the shutout bid 13-minutes into the third period. Aydar Suniev replied for the Vees 29 seconds later, on a solo rush to make it 7-1.

The Vees face the Cranbrook Bucks Saturday at 6 p.m. at the SOEC. Tickets are $17 for adults, $15 for seniors. Youth 19 and under are FREE, courtesy of Peter’s Brothers Construction.

Tickets are available at the Valley First box office, or online at www.valleyfirsttix.com