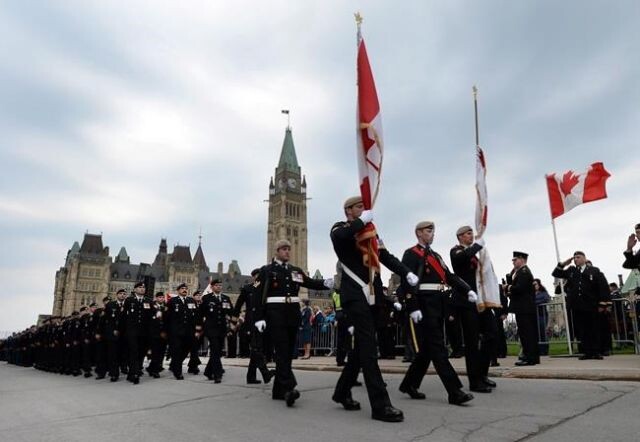 Photo: The Canadian Press
Soldiers parade from Parliament Hill as they take part in the National Day of Honour in Ottawa.

The veterans’ ombud says many ill and injured ex-soldiers and their families are needlessly fighting for access to federal support and services because the government is refusing to act on a growing number of recommendations from her office.

In an interview with The Canadian Press, Nishika Jardine noted her office’s mandate is to identify systemic barriers and unfairness in how veterans are treated, and put forward solutions on how those problems can be fixed.

Yet the retired army colonel says the government has acted on a shrinking number of the watchdog’s “well-considered” recommendations in recent years, to the detriment of disabled veterans and their loved ones.

“It’s crystal clear that over the past four years, the government is falling behind in doing the work that’s required to address the inequities that we’ve highlighted,” said Jardine, who took over her current position in November 2020.

The problems identified by the watchdog’s office since 2017 include long wait times for veterans to find out whether they qualify for disability benefits and assistance. Those waits have been especially long for women and francophones injured while in uniform.

Jardine also called attention in June to what she says is the unfair treatment of veterans’ family members, who are unable to access mental-health services unless doing so is part and parcel of the veteran’s own treatment plan.

Veterans Affairs Minister Lawrence MacAulay’s office said the government has accepted many of the watchdog’s recommendations, including her request in June that Veterans Affairs fund peer-support programs for victims of military sexual misconduct.

“We have also implemented recommendations which improved mental health supports for veterans and their families, improved compensation for ill and injured veterans, and launched a veteran ID card,” spokesman Cameron McNeill said in an email.

“We will continue to work with the ombud and her office to improve the services and supports we provide to our veterans and their families, including a further reduction in processing times for veterans, which is a top priority that both she and the minister share.”

Jardine, who is the first woman to occupy the position and is transitioning the office's title from ombudsman to ombud, isn’t the first to express frustration about what she sees as the government’s lackadaisical response to the office’s concerns.

Jardine's predecessor Craig Dalton quit in May 2020 after only 18 months in the job.

Yet a report released by Jardine late last month said the past few years have seen that trend grow as fewer and fewer recommendations have been implemented.

The government has implemented only six of 26 still-relevant recommendations made between April 2017 and March 2021.

Those 26 recommendations focused on providing mental-health support to family members as well as more equitable access to financial assistance and compensation for all disabled veterans, and making sure veterans aren’t left waiting months and years for help.

The report said those wait times accounted for 43 per cent of all complaints received by the office, making it the top issue raised by veterans. That is despite the government having hired hundreds of temporary staff to address a backlog of more than 40,000 claims.

(The annual report did not include the government's move to implement peer support for sexual misconduct, which will be covered in next year's iteration.)

Jardine, who previously told The Canadian Press that she endured the same long and frustrating wait for her own claim, during which time she was unable to access physiotherapy for injuries sustained while in uniform, said the issue remains a major concern for her.

“Everything is dependent on getting that decision on your disability claim so that you can get well, so you can reintegrate into your civilian life and move on to new employment,” she said. “This is a struggle for a lot of veterans and my heart goes out to them and their families.”

The Canadian Press in a series last month outlined some of the challenges facing today's veterans, including the backlog of claims that has left many waiting for federal assistance.

This report by The Canadian Press was first published Dec. 5, 2021.

Waiting at the bus stop