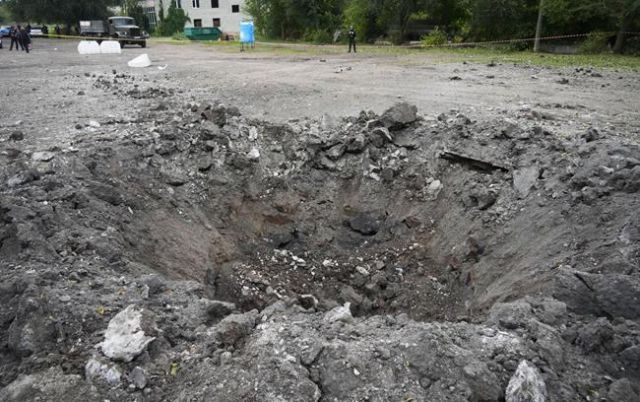 Photo: The Canadian Press
A police officer stands next to a crater created by an explosion after a Russian rocket attack in Zaporizhzhia, Ukraine, Friday, Sept. 30, 2022. A Russian strike on the Ukrainian city of Zaporizhzhia killed at least 23 people and wounded dozens, an official said Friday. Vladimir Putin's claim to parts of Ukraine is little more than "political theatre" with "no legitimacy," Canada and the United States declared Friday, and should have no impact on how best to deploy military aid from the West. THE CANADIAN PRESS/AP/Efrem Lukatsky

Vladimir Putin's claim to parts of Ukraine is little more than "political theatre" with "no legitimacy," Canada and the United States declared Friday, and should have no impact on how best to deploy military aid from the West.

Not only are those claims illegitimate, Joly and Blinken said, but they will have no bearing on how Ukraine chooses to use the weapons, ammunition and other military support the West has been providing.

"It has no validity, no legitimacy, no legal standing — this territory remains Ukraine's," Blinken told a news conference in the State Department's plush Benjamin Franklin dining room, a portrait of its namesake looming above.

"Our support to Ukraine will continue, and that support can be used as Ukraine sees fit throughout the country to defend its territory and, as necessary, to take it back."

Some observers have warned that the annexation strategy, which includes the Donetsk and Luhansk regions in eastern Ukraine and Kherson and Zaporizhzhia to the south, is a ploy to allow Putin to claim he is defending Russian soil.

Neither Blinken nor Joly appeared overly concerned about that Friday.

"This is part of political theatre. Nobody is buying it. And so that's why we will not change the course of our actions."

While in Washington, Joly announced fresh sanctions against Russia that target 43 Russian oligarchs, financial elites and their families and 35 Russia-backed senior officials in the four occupied regions.

Those sanctions came as the U.S. and the U.K. also announced fresh rounds of sanctions: Britain's measures included freezing the assets of Russia's central bank governor, while the U.S. added 900 individuals and 57 companies to its various blacklists.

"We believe that Ukraine should be part of NATO," she said. "It's been our position for now more than a decade, and we believe in the open-door policy."

Both Blinken and Joly acknowledged that Europe, long dependent on Russia for its energy, is facing a difficult winter without access to its usual supplier. But the work to help ease that pressure — in part by reducing demand and looking for renewable alternatives — has been ongoing for months, he said.

The apparent bombings this week in the Baltic Sea that ruptured the twin Nord Stream pipelines between Russia and Germany will have little immediate impact, he added: one has been idled for weeks as a result of the war, while the other has yet to even come online.

Since the invasion began in February, the U.S. has become the leading supplier of liquid natural gas to Europe, and also issued historic releases of oil from its strategic reserves earlier this year, Blinken noted — a move that was aimed at easing the upward pressure on energy prices that has been causing economic and political pain both around the world and at home.

"My own sense ... is, look, there's a lot of hard work to do to make sure that countries and partners get through the winter," he said. But Europe has already taken "very significant" steps towards the transition to renewable energy.

"Ultimately, this is also a tremendous opportunity to once and for all remove the dependence on Russian energy, and thus to take away from Vladimir Putin the weaponization of energy as a means of advancing his imperial designs."

Joly said Canada, too, has increased its energy production in response to the crisis, and she pointed to longer-term solutions as well, including a new $18-billion LNG export terminal under construction near the B.C. coast, expected to be operational in 2025, as well as a new hydrogen facility in Newfoundland.

"We want to be there short-term, with the existing context we know," Joly said.

On Thursday, Swedish officials discovered a fourth leak along the Nord Stream gas pipelines, vital energy links for Europe that have been spewing methane into the Baltic Sea since Monday following two underwater explosions.

NATO says all evidence suggests the pipelines between Russia and Germany were likely damaged by "deliberate, reckless, and irresponsible" acts of sabotage.

The leaks are of "deep concern" and are also endangering shipping lanes, to say nothing of what is expected to be "substantial environmental damage," the alliance said in a statement.

"We, as allies, have committed to prepare for, deter and defend against the coercive use of energy and other hybrid tactics by state and non-state actors."

Russia has tried to deflect charges of responsibility by suggesting that the U.S. was the only country that would stand to gain from shutting down the pipelines, a claim Blinken refused to dignify with a response Friday.

But he also stopped short of pointing fingers.

"We are supporting the investigation into these attacks on the pipelines and working to be able to determine who's responsible, but I don't want to get ahead of those investigations," Blinken said.

"I really have nothing to say to the absurd allegation from President Putin that we or other partners or allies are somehow responsible for this."