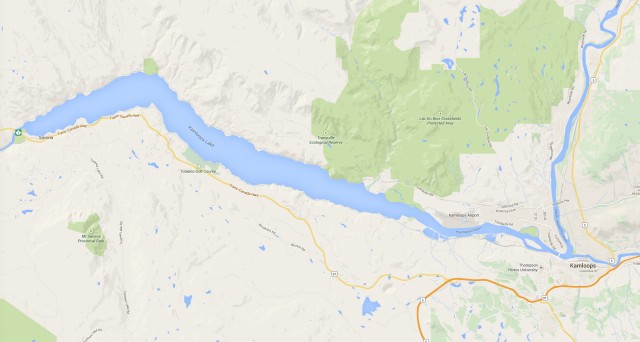 The body found by the lake earlier was Tracey Dawn Dallyn, who had been missing for several days.

The BC Coroners Service has confirmed the identity of the woman.

Dallyn had been reported missing to the Kamloops RCMP on April 13, 2015.

On April 19, hikers spotted her floating against the shoreline on the north shore of Kamloops Lake below Battleship Bluff. She was deceased at the scene.

The BC Coroners Service continues to investigate this death. Foul play has now been ruled out.

Dallyn's family has been notified of her death.

On behalf of family members, the BC Coroners Service asks that the media respect their privacy at this difficult time.

Hikers walking along the North Shore of Kamloops Lake on Saturday discovered the body of a woman along the water's edge.

Due to the undetermined nature of the woman's death, the RCMP South East District Major Crime from Kelowna was contacted to take over the investigation.

An autopsy was performed Tuesday at Royal Inland Hospital in Kamloops, and the results of that autopsy have determined that no foul play was involved.

The deceased is a 50-year resident of Kamloops, and police will be turning over the investigation to the B.C. Coroners Service for additional investigation and possible release of identity.

Comments are pre-moderated to ensure they meet our guidelines. Approval times will vary. Keep it civil, and stay on topic. If you see an inappropriate comment, please use the ‘flag’ feature. Comments are the opinions of the comment writer, not of Castanet. Comments remain open for one day after a story is published and are closed on weekends. Visit Castanet’s Forums to start or join a discussion about this story.