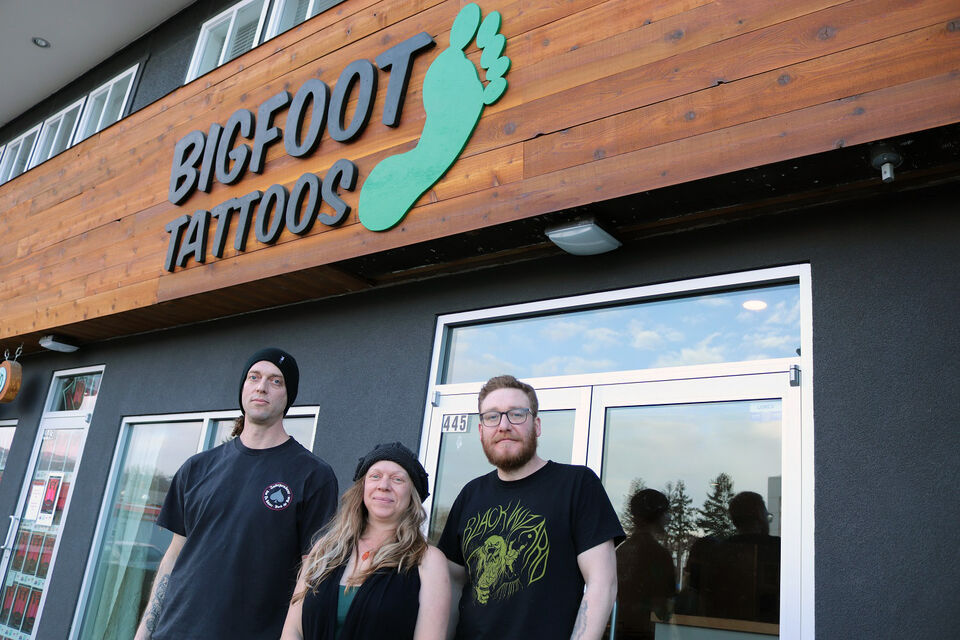 The tattoo shop is located at 445 Tranquille Rd. (via Tereza Verenca)

There's a new place to get inked on the North Shore.

Bigfoot Tattoos, owned and operated by Clay Walker and his partner Lori Blunden, opened its doors on Feb. 27. The business, made possible through the Community Futures program, is located at 445 Tranquille Rd., next to Red Beard.

The tattoo artists include Walker (who's been mastering the craft for the last 10 years), Kevyn Harper (also a veteran of the trade) and apprentice Kelly Wright. You may know Wright from his mural artwork around Kamloops.

The shop, which was designed with an open concept in mind, is just over 1,000 square feet and has an earthy vibe to it. Each artist has their own area to get creative and draw.

Walker, who's self-taught, describes his style as "photorealism."

"A lot of custom work too, so I do freehand tattooing as well. That's where you actually draw right on the skin," he says.

"One of my favourites is... he tattooed a beautiful butterfly on my mom," Blunden says of Walker's work. "My mom’s like 70-plus. She loves it. It’s her first and only tattoo. She gets tons of compliments."

Harper, meanwhile, has become versed in all styles of tattooing. As a student of art history, Harper is now most interested in dark expressionist art forms, but is able to meet any style from his 17 years of experience, say the pair.

Wright has always wanted to be a tattoo artist.

"When I was starting off in Kamloops, I went to a lot of tattoo shops and just tried to get my foot in the door," explains Wright, who also does carpentry on the side. "It never worked out for me, so I just spent my time focusing on the mural work around town. I got my name out that way. ... I love doing murals because everybody gets to see the artwork, but this is a more individual thing and more personal, which I’ve always wanted to get into."

"It's been a long time coming," he says of the apprenticeship opportunity, noting it's a tradeoff. Wright helped Walker with the store renovations in exchange for Walker's mentorship.

When KamloopsMatters stopped by the shop, Wright had just completed his first inked piece (a warhammer symbol) on a friend. It went well, he says.

"It was really comfortable. It felt good. Clay was right there with me the whole time, teaching me the techniques and procedure and setup and everything, pretty much on the spot."

A big component of the company's business plan is to make Earth-conscious choices. The pair say they will try to reduce as much waste as possible by buying products that are eco-friendly.

"The tattoo industry, like many other industries... Everything we use is disposable. We use disposable needles, disposable tubes," says Walker. "We're trying to source out products that are compostable."

He adds they'll be recycling what they can, including packaging.

"Like blister packs; every tube is blister packed. It usually gets thrown in the garbage."

"I think every little bit helps," Blunden chimes in. "I think it's important for everybody in the world right now. Why not try?"

To that end, it shouldn't be surprising that Walker and Blunden settled on Bigfoot as their business name.

"We’ve been talking about the footprint, our carbon footprint," says Blunden. "Bigfoot doesn’t leave a lot of footprints, right? Bigfoot is like the caretaker of the Earth. Bigfoot lives in the forest, lives in nature."