A tribute for Sandei 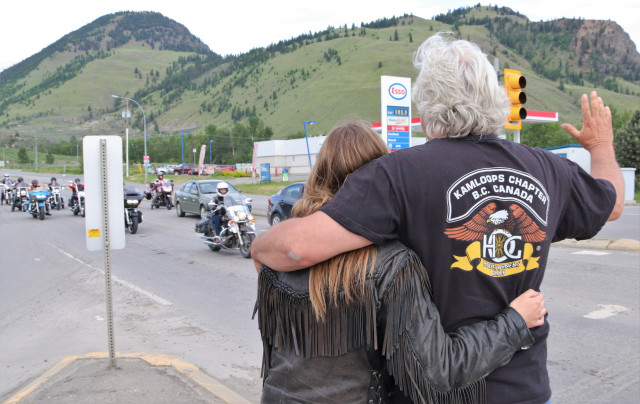 It's been just over a week since Sandei died in a collision, involving her Harley motorcycle and a small SUV, on May 13. Around 4 p.m. that day, a 2010 Kia Soul was heading south on Highway 5. At the intersection of Highway 5 and Halston Avenue/Paul Lake Road, the Soul turned left across traffic and in front of Marshall, who was heading northbound on the highway.

Sunday evening (May 24), the Kamloops Harley Owners group held a tribute ride for their fallen member. Friends and family of hers stood at Paul Lake Road and Highway 5, to take it all in.

"This is our home intersection," says Jessie Marshall, Sandei's daughter, pointing up the highway.

The intersection is one Sandei rode through hundreds, if not thousands, of times, her family says.

"She did it every day; she came through here every day on her bike and she would ride when it was cold," Glenn tells Castanet. "I would take the car. If it was too hot, I'd want AC and she'd want to go on the bike."

"This was the dividing line where our our working careers ended," he adds. "We worked together for 25 years, so if we had an argument past this intersection, that person went back to work."

Glenn and Sandei were together for 38 years; they have lived in Kamloops for the past 28.

Sandei was a member of the Kamloops Harley Owners Group for around 10 years, says spokesperson Robert Aubé.

"Sandei was beloved by all members far and wide, even non-members. Anybody who rode, she was a friend to so, so many," he says.

Aubé describes Sandei as a "dynamo, a pivotal member" and the glue of the group.

"She helped out on so many levels and really did a lot of things to foster goodwill and good spirits amongst the members," he says.

Wendy Ego, a friend of Sandei's, was on hand to watch the tribute ride.

"We rode together, we played together," Ego says.

"She was an incredible baker, she made incredible cakes; she would make the Halloween cakes that would be creepy and crawly and you wouldn't even know it was a cake.

"She was our Princess Sweetie."

Glenn notes Sandei was a victim of COVID-19, in a way; they were supposed to be on vacation out of the country right now, but the pandemic changed their plans. Now, he says, it's difficult to go through the grieving and funeral process with social distancing protocols in place.

"We're not able to do it the way it should be because of this," he says.

He adds he'd like to see the sign above Highway 5 at the intersection changed from its current message (advocating for social distancing during the pandemic), to something reminding drivers to watch out for motorcycles.

"People need to be a little more alert about motorcycles," Glenn says. "Awareness is absolutely imperative."