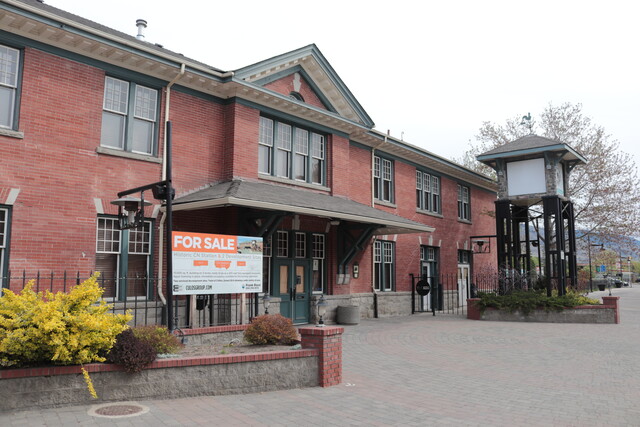 Photo: Kristen Holliday
The old CN station, formerly a The Keg Steakhouse location, will be the home of a new distillery

Members of the business community located adjacent to the old CN Railway building say they are excited that new owners will be occupying the currently vacant space.

This week, John Hromyk, president of Alberta-based Two Pine Ventures, confirmed the historic train station, which last saw use as the location of a The Keg Steakhouse, will be converted into a destination distillery serving food and drinks.

The Kamloops Symphony Orchestra has their offices situated directly across from the former rail station. Daniel Mills, executive director for the KSO, said it will be nice to see more people around the plaza.

“I’ve been here for almost two years now, and I’ve seen it just sit here vacant. It’s such a beautiful building, I feel that for Kamloops, we should be really celebrating and attracting people to it,” Mills said.

"With a rise in breweries and distilleries, this is a great thing for us culturally."

In an email to Castanet Kamloops, Cory Clark, executive director for Kamloops Heritage Railway, said he thinks the plan to repurpose the building as a distillery and restaurant is “an excellent one.”

“This is a great opportunity to inject new life into it. ... I think it will do really well, and will be a great addition to the community,” Clark said.

“With the history of the building and their tie-in to the railway, I see a great opportunity for a working partnership and a potential to collaborate on some really unique and exciting events. They have my full support and I look forward to building a relationship with our new neighbours.”

Hromyk said Two Pine Ventures, working in partnership with local investors, have been able to get an accepted offer to purchase the 93-year-old structure, along with two vacant lots on either side of the building.

Two Pine Ventures builds and operates destination distilleries, and has its own brand of spirits marketed in B.C. and Alberta.

Hromyk said the establishment in the old railway will be a subsidiary, owned and operated by a group they are assembling in Kamloops.

“We’ll have a minority position and be able to guide this project, and also provide contracts for some of our other products that we’re creating ourselves.”

Hromyk said there is not a lot of retrofitting that needs to be done, so they anticipate being open by mid-summer.

“The Keg left us pretty much an amazing, close to turnkey opportunity to open up a bar, a lounge and a tasting room for our products," he said.

"And then that will get us into cash flow and provides another attraction in that area to bring people down.”

Future plans involve constructing a distilling centre on the lot located to the west of the building.

“That's going to be pretty exciting, because it'll be the first thing you'll see when you come out of out of the arena and into the parking lot,” Hromyk said.

“This will be a brand that will be Kamloops’ brand, and Kamloops products will be manufactured out of there.”

Carl DeSantis, executive director for Kamloops Central Business Improvement Association, said the distillery would give people yet another choice for food and beverages when they come to the area.

“This is a really good initiative, a real positive impact we look forward to for the entire downtown,” he said.