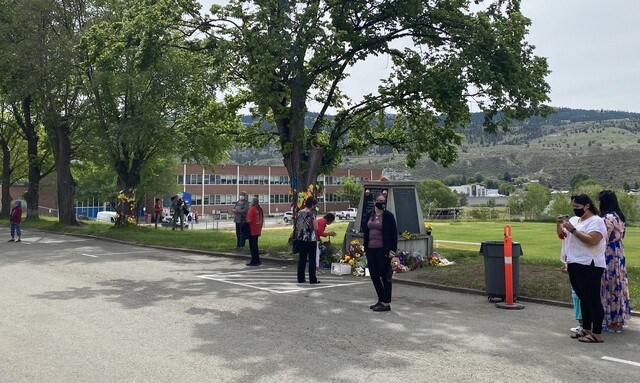 Photo: Kristen Holliday
People visit a memorial site on Sunday morning for the 215 children whose remains were found buried at the site of the former Kamloops residential school.

The Tk’emlups te Secwepemc will continue to incorporate First Nations traditions into the work being done to investigate remains found at the site of the former Kamloops residential school, according to Kukpi7 Rosanne Casimir.

Casimir said the band has its own ancestral remains policy, and its own archaeological bylaws in place to inform the work that is being done to uncover the remains.

“We want everyone to be assured that we do follow them, and our number one protocol is ceremony, and then the work that follows that,” Casimir said.

Tk’emlups te Secwepemc announced Thursday that the remains of 215 children were found buried at the site of the former Kamloops Indian Residential School, which was at one point the largest in the Indian Affairs residential school system.

The remains were found with the help of a ground penetrating radar specialist, Casimir said, with work being undertaken by the C7elkstens re Secwepemc ne Ckultens ell ne Xqweltens — the Secwepemc Language and Culture department — along with ceremonial knowledge keepers.

She said past research on missing children and groundwork led to the most recent findings.

“We also do know that it dates back from the stories that were shared, but it was also about the not knowing, and wanting to find answers and solutions,” Casimir said.

“Our Language and Culture department, they did reach out to Pathway to Healing and sought out funding, and brought in professionals who have the technology today to do that kind of research and groundwork.”

Tk’emlups te Secwepemc said they are expecting to complete their preliminary findings by mid-June.