The Sparks Lake wildfire has tripled in size, causing the Thompson-Nicola Regional District to issue a new evacuation alert for 150 properties in Electoral Area J.

According to the BC Wildfire Service, the fire was estimated at 750 hectares on Tuesday afternoon, but as of 10:30 p.m. Tuesday night, the fire has grown to 2,300 hectares in size.

“The fire saw significant growth through the day, because of the hot and dry conditions we're seeing,” said Madison Smith, fire information officer for BCWS.

"Today on the fire, multiple helicopters had to shut down due to their engines overheating. Suppression efforts where also impacted due to the helicopters restricted lifting capacity in this heat, limiting the amount of water they can put in their buckets at a time," said BCWS on Facebook.

Smith said 20 firefighters are stationed on scene overnight, continuing to fight the blaze.

The fire is still classified as out of control.

The TNRD has issued an evacuation alert for 150 properties in the Deadman, Red Lake, Tranquille Valley and Vidette Lake areas.

“This evacuation alert has been issued to prepare you to evacuate your premises or property should it be found necessary,” a statement from the TNRD said.

“Residents will be given as much advance notice as possible prior to evacuation, however you may receive limited notice due to changing conditions.”

This alert is in addition to an evacuation order issued by the TNRD earlier Tuesday for nine other properties in Electoral Area J.

More information on which properties are under evacuation alerts or orders can be found on the TNRD website.

The Thompson-Nicola Regional District is declaring a state of local emergency in response to the Sparks Lake wildfire.

The state of emergency is in place for Electoral Area J, located near Red Lake. An evacuation order was issued on Tuesday afternoon for nine properties located in that area as the wildfire is displaying aggressive behaviour.

According to the TNRD, by declaring a state of emergency, local authorities are able to exercise certain emergency powers.

“The emergency powers are used to order the evacuation of residents from their homes, prohibit travel and enter private property when an emergency threatens lives, property, or the environment within the TNRD’s jurisdiction,” a statement from the TNRD said.

The state of local emergency will remain in effect for seven days.

The Sparks Lake wildfire is estimated to be 750 hectares in size, according to the BC Wildfire Service.

BCWS said there are currently 47 personnel responding to the fire, along with six pieces of heavy equipment. Ground crews are being supported by six helicopters.

According to the BC Wildfire Service, the Sparks Lake blaze near Red Lake is displaying aggressive behaviour, and an evacuation alert for properties near the fire has been upgraded to an order.

“Due to the hot and dry weather, increased fire behaviour is being seen on site,” the BCWS said in a statement. “This is an evolving situation in which BC Wildfire Service continues to adjust and increase their resources to match the activity on site.”

The blaze is believed to be human caused.

Smoke from the Sparks Lake wildfire is now very visible from all parts of Kamloops.

A large plume of smoke can be seen rising to the northwest of the city, drifting eastward. The smoke has become more prominent throughout the day.

The fire was estimated at 350 hectares in size on Tuesday morning. The BC Wildfire Service told Castanet Kamloops it expects to have an update soon.

A fast-moving wildfire threatening homes northwest of Kamloops has once again doubled in size, now sitting at an estimated 350 hectares.

“This morning, our crews on site are reporting really heavy smoke in the area, which will be visible from Kamloops and neighbouring communities,” fire information officer Madison Smith told Castanet.

Smith said no structures have been destroyed, but an evacuation alert remains in effect for a number of properties in the area.

According to Smith, crews fighting the fire in extreme heat are taking extra precautions to stay safe.

“Our crews are obviously out there working in this heat,” she said.

“They’ve been instructed to take more frequent breaks. Hopefully they can get some shade to rest in as well as lots of water.”

This story will be updated throughout the day as more information becomes known.

Do you have photos or video of the fire or smoke? Email [email protected]

There is no update to be had on the Sparks Lake fire, burning an estimated 180 hectares northwest of Kamloops near Red Lake as of last count on Monday night.

BC Wildfire Service fire information officer Madison Smith told Castanet she expects to have an update at about 11 a.m.

“The most recent update we have is the one we had last night,” she said.

The Sparks Lake fire is burning north of Kamloops Lake. It was first reported late Monday afternoon, and grew quickly in size from an estimated 10 hectares to 40 hectares, then to 100 hectares at 9 p.m. A few hours later, BC Wildfire Service said the blaze had grown to an estimated 180 hectares.

Castanet Kamloops has a reporter en route to the fire area. This story will be updated throughout the day as more information becomes known.

Do you have photos or videos of the fire? Email [email protected]

Crews continued suppression efforts, and the fire remains classified as out of control.

As of Monday night, it was estimated to be 180 hectares in size.

The alerts were issued as of 10:30 p.m. for the following addresses:

The blaze broke out Monday amid record temperatures as B.C. continues to swelter under a heat wave. Record-setting conditions are expected to continue today.

The wildfire service was fighting the blaze Monday with 27 firefighters, two helicopters, two pieces of heavy equipment, and eight airtankers.

We will have more information on this fire and others in the Interior throughout the day. 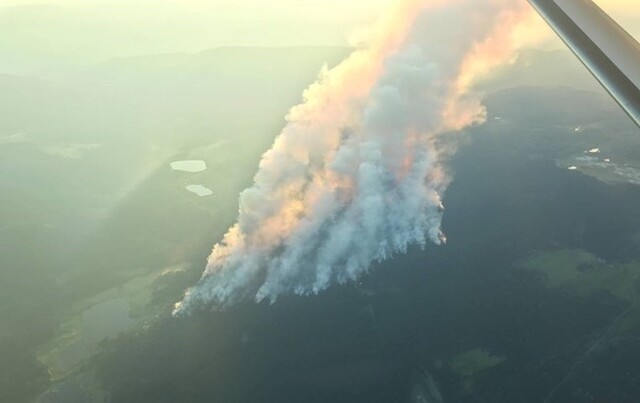