The Sparks Lake fire has grown substantially in the past 24 hours.

The BC Wildfire Service said, due to the hot and dry weather, increased fire behaviour is being seen on site.

It’s being called an evolving situation and BCWS continues to adjust and increase their resources to match the activity of the fire.

According to a statement from the TNRD, residents living in the affected properties must leave immediately.

Those leaving as a result of the evacuation order are asked to report to the McArthur Island Sports Centre parking lot in Kamloops.

For information regarding the addresses affected by the new evacuation order, visit the TNRD emergency alerts webpage.

According to DriveBC, Tranquille-Criss Creek Road is closed due to the Sparks Lake fire at the 30 kilometre mark from Kamloops Lake.

Deadman Vidette Road is also closed, at the 16 kilometre mark off of Highway 1.

The BC Wildfire Service said the Sparks Lake Wildfire (K21001) remains at an estimated 4000 hectares.

There were 56 firefighters, 10 helicopters and 2 pieces of heavy equipment working the fire Wednesday. Earlier evacuation alerts remain in place.

Deadman Vidette Road is closed due to the fire, at 16 kilometres off Highway 1. Drive BC said the next update will be at 7 p.m.

The Thompson-Nicola Regional District has issued another evacuation alert for 298 properties in the Loon Lake and Hihium Lake areas due to the growing Sparks Lake wildfire.

The alert has been in effect since 2 p.m. Wednesday.

“This evacuation alert has been issued to prepare you to evacuate your premises or property should it be found necessary,” a statement from the TNRD said.

“Residents will be given as much advance notice as possible prior to evacuation, however you may receive limited notice due to changing conditions.”

Residents are encouraged to fill vehicles up with gas, pack essential items, prepare to move livestock to a safe area and prepare to arrange transportation and accommodation for members of their households.

An evacuation alert was issued Tuesday for 150 properties in the Deadman, Red Lake, Tranquille Valley and Vidette Lake areas.

In total, 448 properties have been given a warning that they may need to evacuate.

The TNRD has issued evacuation orders for 27 properties in Electoral Area J.

According to the BC Wildfire Service, as of Wednesday afternoon there are 56 firefighters and two pieces of heavy equipment fighting the blaze.

Ground crews are working to establish control lines with assistance from the heavy equipment.

The BC Wildfire Service said 10 helicopters are also on scene helping to fight the fire from above.

“Due to the hot and dry weather, increased fire behaviour is being seen on site,” BC Wildfire Service said in a statement.

“This is an evolving situation in which BC Wildfire Service continues to adjust and increase their resources to match the activity on site.”

Interior Health has issued a statement saying it is closely monitoring wildfire activity near Lillooet and Red Lake, watching for any threats to health facilities or services.

“We are working closely with municipalities, regional districts and the BC Wildfire Service to ensure precautions are underway to protect patients, clients and residents,” IH said in a statement.

“Interior Health will ensure any potentially impacted home health clients are prepared in the event of an evacuation.”

IH said wildfire planning includes supporting anyone who might be in isolation due to COVID-19.

The health authority said they will make sure separate arrangements are made for anyone with confirmed or suspected COVID-19 who may need to evacuate.

IH said they are also reminding residents to prepare for deteriorating air quality as wildfire smoke begins to drift across the region.

A fast-moving wildfire threatening homes northwest of Kamloops has once again grown significantly, now sitting at an estimated 40 square kilometres in size.

Wildfire officials issued an update at about 11:30 a.m. on Wednesday, saying the fire is now estimated at 4,000 hectares.

The BC Wildfire Service said extreme heat and dry conditions mean “increased fire behaviour” is being seen on site.

The Thompson-Nicola Regional District has issued evacuation alerts and orders for a number of properties in the Red Lake area. (Click here for more information about which properties are impacted and what to do if you live on one of them.)

Thirty-five firefighters are on-scene on Wednesday, along with seven helicopters, six skimmer planes and two pieces of heavy equipment.

“Overnight the crews saw continuous fire activity while they worked to push in guards for the fire,” the BCWS statement read.

“This is now a 24-hour operation and there will be crews on site day and night. BC Wildfire Service is adjusting their resources to match the activity of the fire.”

The Sparks Lake fire, burning north of Kamloops Lake, was discovered on Monday and has grown quickly in size.

The cause of the blaze is under investigation, but it was believed to be human-caused.

More homes in the potential path of a fast-moving wildfire northwest of Kamloops have been placed on evacuation order.

The Thompson-Nicola Regional District made the change on Wednesday morning, upgrading 18 rural addresses near the Sparks Lake wildfire to evacuation order. (For details about properties affected, click here.)

The BC Wildfire Service has not issued any updates regarding the size of the fire since 10:30 p.m. on Tuesday, when it was an estimated 2,300 hectares in size.

This story will be updated throughout the day as more information becomes known.

Wildfire officials expect to have an update on the fast-moving Sparks Lake fire, burning an estimated 2,300 hectares northwest of Kamloops, by about 10:30 a.m.

The fire was first spotted on Monday and has since then been doubling in size a number of times each day. The last update, which put the blaze at an estimated 2,300 hectares, was provided by the BC Wildfire Service at 10:30 p.m. on Tuesday.

A fire information officer told Castanet Kamloops on Wednesday morning that an update was expected within the hour.

The blaze has prompted the Thompson-Nicola Regional District to issue a number of evacuation orders and alerts.

Smoke from the fire is visible in Kamloops, where residents woke up on Wednesday to hazy skies.

Twenty firefighters worked through the night on the Sparks Lake wildfire burning northwest of Kamloops.

The 2300-hectare blaze saw significant growth on Tuesday due to continued extreme heat and dry conditions in the area, the BC Wildfire Service said before signing off for the night.

Record-breaking hot weather continues to cause challenges, the service says.

"Multiple helicopters had to shut down due to engines overheating. Suppression efforts were impacted due to the helicopters' restricted lifting capacity in heat, limiting the amount of water they can put in their buckets at a time," the wildfire service tweeted Tuesday night.

The blaze continues to burn out of control and its smoke plume is highly visible from Kamloops.

"This is an evolving situation in which BC Wildfire Service continues to adjust and increase resources to match the activity on site."

On Tuesday, there were 47 personnel on site, supported by helicopters and heavy equipment.

Evacuation orders were issued for nine properties, and alerts remain in place for 150 properties in Electoral Area J, in the Deadman, Red Lake, Tranquille Valley and Vidette Lake areas.

The blaze prompted the Thompson-Nicola Regional District to declare a state of local emergency.

The fire is believed to be human caused.

No structures have been destroyed. 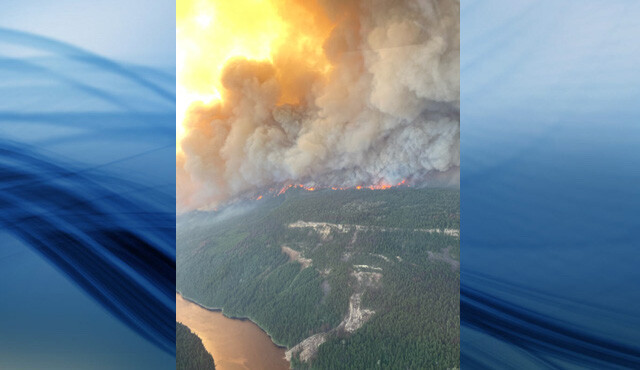