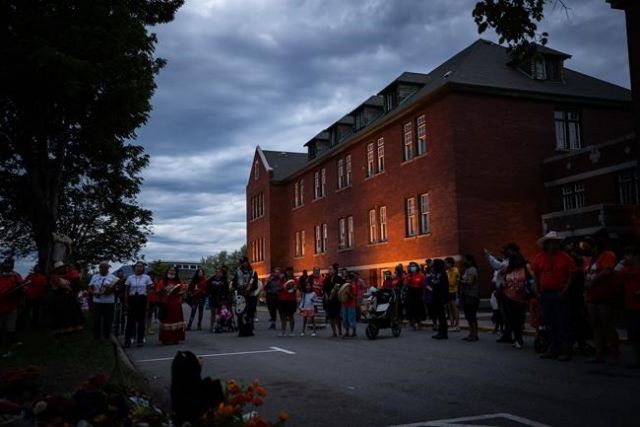 The finding of a child’s rib bone near what used to be an apple orchard on the grounds of the former Kamloops residential school helped researchers locate an unmarked graveyard containing the remains of hundreds.

Tk’emlups te Secwepemc Chief Rosanne Casimir on Thursday said more help is needed — including cooperation from the federal government — in the search for remains at Canada’s former residential schools. Casimir and a number of experts and other speakers provided an update Thursday on the investigation into the finding.

On May 27, Casimir announced 215 graves had been located on the grounds of the former Kamloops Indian Residential School. She said the discovery was made with the use of ground-penetrating radar.

On Thursday, Casimir called on Prime Minister Justin Trudeau to hand over records she said are in the care of the federal government — attendance records from Kamloops Indian Residential School that could help confirm the identities of some of those buried in the unmarked graveyard.

“Those primary documents, currently within the custody of the Canadian government, will be of critical importance to identify those lost students,” Casimir said.

“Every student who ever attended Kamloops Indian Residential School is documented in those records. … We call on Prime Minister Trudeau and the Canadian government to share those attendance records as a first step in assisting Tk’emlups te Secwepemc.”

Dr. Sarah Beaulieu, a ground-penetrating radar specialist who carried out the work for the band, said a juvenile rib bone that surfaced and a juvenile tooth that was found later helped investigators figure out where exactly to search — as did stories from elders and former students at the school.

Beaulieu said the search was carried out near a former apple orchard on the school’s grounds.

According to Beaulieu, about 160 acres on the grounds of the former school still need to be searched and exhumations will likely have to take place.

She said upwards of 200 “anomalies” have been located using radar.

“These results are as conclusive as [ground-penetrating radar] allows,” she said.

“Only forensic investigation with excavation will provide definitive results.”

Beaulieu said she believes “there are likely to be many burials in the study area” at the former Kamloops school.

“Further remote sensing such as [ground-penetrating radar] should be conducted to locate all possible burials,” she said.

“This investigation has merely scratched the surface since two acres of a total 160-acre residential school site has been surveyed.”

Later this month, the Tk’emlups band will host a best-practices seminar on the use of ground-penetrating radar to locate unmarked gravesites. The seminar will be free and open to any First Nation or Indigenous community or association.

The Tk'emlúps te Secwépemc First Nation is set to release a report today outlining the findings of a search of the former Kamloops Indian Residential School property using ground-penetrating radar.

The Kamloops area First Nation will host a public presentation on the findings of the report on unmarked children's graves, including a briefing on the technology used and an explanation of next steps.

Members of the public are invited to witness to the presentation, which will be streamed online and include statements from school survivors.

The Tk'emlúps te Secwépemc announced in May that the ground-penetrating radar had identified what are believed to be the remains of 215 children in unmarked graves.

Since then, other First Nations have reported similar devastating discoveries.

The Cowessess First Nation reported 751 potential unmarked grave sites in Saskatchewan last month, while a newsletter circulating online this week from the Penelakut Tribe on Vancouver Island said more than 160 undocumented graves had been found near Chemainus.