No structures lost yet in Logan Lake due to wildfire 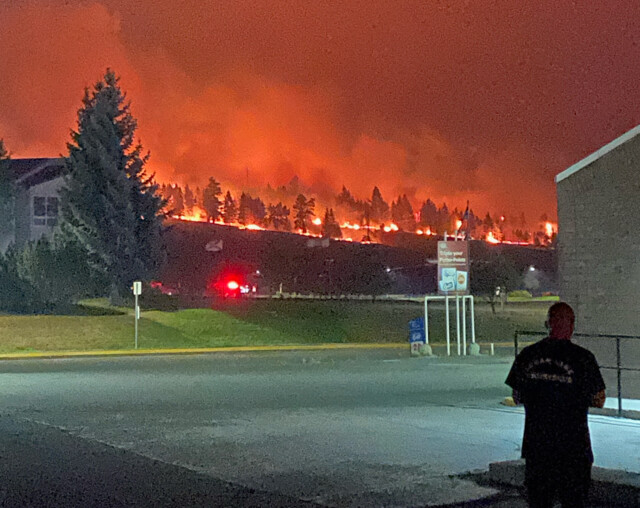 Logan Lake Fire Rescue says no structures have been lost in the community so far.

"But I need you all to know that we have NOT lost any structures,” the post reads.

“The sprinklers have worked great and the fight is far from over. It will be a long night, we look forward to [seeing] you all very soon,” the post continues.

The fire has been burning within municipal limits for hours now.

The fire department also shared photos of the fire within the community.

Officials have ordered additional evacuations west of Kamloops on Saturday night due to a wildfire burning near Logan Lake.

Just after 9 p.m. on Saturday, the Thompson-Nicola Regional District issued an evacuation order for 117 properties between Lac le Jeune and Logan Lake. To see which properties are impacted, click here.

The Tremont Creek wildfire has crossed into Logan Lake’s municipal boundaries. Crews are working on Saturday night to protect structures amid strong winds pushing the fire into the community.

As of 8 p.m., Logan Lake officials said they were not aware of any structures having been lost.

Video making the rounds on social media shows air tankers dropping retardant on what appears to be residential neighbourhoods in Logan Lake.

Castanet is monitoring the Tremont Creek fire closely. This story will be updated when more information is known.

Teck Resources says there is currently no risk to infrastructure at the Highland Valley Copper Mine, which was ordered evacuated earlier this evening.

“All workers are being safely demobilized from the site with the exception of a small number of employees necessary to responsibly ensure safety and environmental protection,” the company said in a short statement.

Teck says they are closely monitoring the situation and have shut down operations at the mine.

The Highland Valley mine is the largest copper mine in Canada and employs more than 1,300 people. 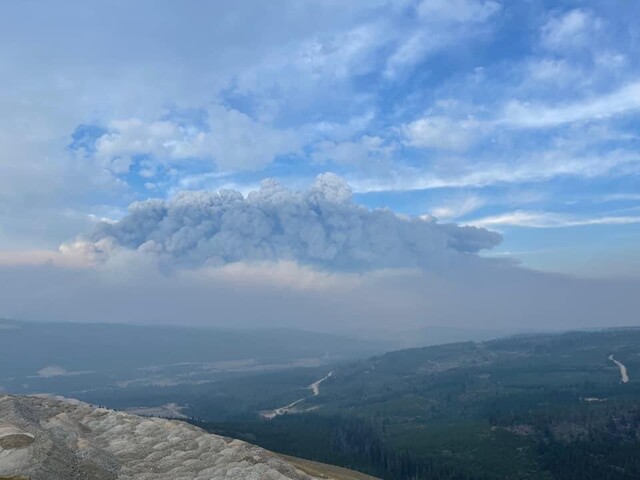 Photo: Contributed
View of the Tremont Wildfire from HVC as they evacuated

The Mile High Resort near Logan Lake is preparing for an incoming evacuation order to be issued due to the Tremont Creek Wildfire.

Owners Bob and Tash van Tongeren posted to Facebook about their plans for Saturday evening.

"To all of guests we are currently still on alert but have been advised to leave and have been advised that the evacuation order will be put in place at 11 p.m. tonight. Our power has been cut off by the fire in Logan Lake and we have generators running and Bob is still at the lodge but very busy outside and unable to answer the phone. This fire moved very quickly today and we truly apologize to all of our guests that were currently staying with us and our guests that were to arrive today," their post reads.

The owners are working to forward the office phone to their cell phone, but guests are asked to call Tash at 250-574-3312.

"We pray for the community of Logan Lake this evening and Mile High.Thank you everyone for your understanding."

The resort will be calling all of our guests that are to be arriving in the next couple days.

The District of Logan Lake is reporting that no structures have been lost as the Tremont Creek wildfire burns into the town boundaries on Saturday night.

The fire on the north and west side of Logan Lake has expanded and is now threatening the mine site. The mine has been issued evacuation orders.

"The preferred escape route is Ashcroft. The Kamloops route is not available," their update reads, reminding residents that evacuation order for Logan Lake remains in effect.

The fire is also being attacked by air and ground crews along the west and north sides of the town. Flames are visible from the town.

"We have extensive fire truck crews established to fight any spot fires from embers that land on homes and other structures in our town."

The emergency operation centre has been evacuated to Kamloops since Logan Lake's power systems have now been cut by fires and have lost internet connection.

BC Wildfire Service is reporting the Tremont Creek wildfire is now within the boundaries of the District of Logan Lake.

The fire has exhibited significant fire activity on the east and south flanks on Saturday, prompting multiple evacuation order and alerts. Substantial growth took place in the south.

Air tankers are currently supporting and structural protection personnel are established with firefighting apparatus to protect from ember cast.

There has also been aggressive fire activity near Tunkwa Lake this afternoon as a result of strong gusting winds.

BCWS says structure protection has been established in this area and helicopters have been supporting with bucketing operations when visibility allows.

The District of Logan Lake has issued expanded evacuation orders due to the Tremont Creek wildfire. 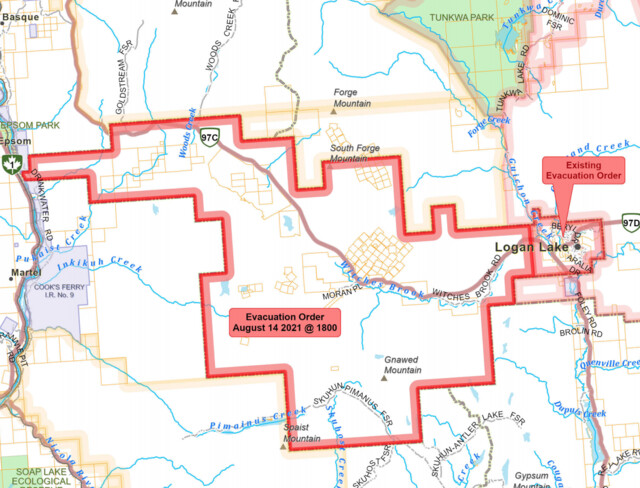 A new evacuation alert has been issued by the TNRD due to the Tremont Mountain fire. Fifty-nine properties south of Logan Lake have been placed on alert.

Along with any other properties located within the area noted on the map below or online here.

The evacuation alert for these properties is effective at 6 p.m. on Saturday.

In an update from BC Wildfire Service at 4:30 p.m., they reported "significant fire activity on the south and east flanks" Saturday afternoon. Ground crews are focused on structure protection in Tunkwa Lake, where a heavy-lift helicopter is supporting with bucketing operations.

On the southern flank, the fires edge is approximately three kilometers west of Logan Lake. Air tankers are currently supporting by dropping fire retardant, and personnel are focused on structure protection.

Heavy equipment, ground crews and fallers are focusing on establishing a contingency guard on the south flank of the fire by widening the fuel free area underneath the power line. 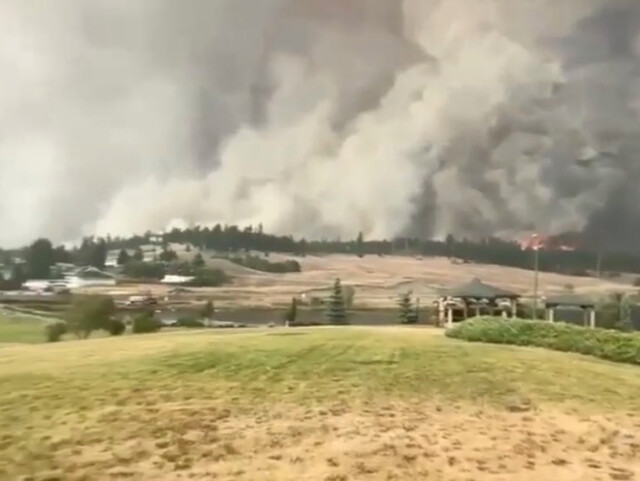 The mayor of Logan Lake is asking evacuated residents to be patient while officials attempt to gather and disseminate information about an aggressive wildfire threatening the community Saturday.

The massive Tremont Creek fire is burning just west of Logan Lake. Crews are attacking the fire from the air on Saturday afternoon in an effort to preserve structures in the area.

Mayor Robin Smith said she is in the process of travelling from Logan Lake to Kamloops, where the municipality will be setting up a temporary emergency operations centre. The move was made after power was lost in Logan Lake early on Saturday afternoon.

“Right now, we’re just in the midst of trying to get connections back to computers,” Smith said.

“As soon as we can, we will get messaging back out.”

When asked about structure losses in the Logan Lake area, Smith said she hasn’t heard of any.

When asked whether there was a message she wished to relay to Logan Lake residents, Smith urged calm.

“Please have patience,” she said.

“We are doing the best that we can. As quickly as we can get connectivity and get information out, we will do that. Other than that, I’m really just hoping for the best right now.”

Castanet is monitoring the Tremont Creek fire closely. This story will be updated when more information is known.

The fight is on in Logan Lake, where crews on the ground are receiving help from above in an effort to save structures in and near the 2,000-person community.

The latest estimates place the fast-moving Tremont Creek wildfire about one to three kilometres west of Logan Lake.

“They are currently water bombing the fire to the west of our town,” Logan Lake administrator Randy Diehl told Castanet at about 3:15 p.m. on Saturday, estimating the targets to be about three kilometres away.

“And they’re laying down retardant along the western edge of our community’s properties, which are rural properties.”

Logan Lake Fire Chief Doug Wilson said his crews are up to the task.

“The fight is on but my crew are ready,” he said when contacted by Glacier Media.

Firefighters in Logan Lake are being aided by crews from other B.C. municipalities. Dozens of fire trucks from across the province are said to be in the community.

Diehl said the District of Logan Lake is moving its emergency operations centre from the townsite to Kamloops.

Castanet is monitoring the Tremont Creek fire closely. This story will be updated as more information becomes known.

An aggressive wildfire is moving closer to Logan Lake on Saturday, now burning within one to three kilometres of the Kamloops-area community.

That's according to the latest information from the BC Wildfire Service.

“It is still moving south and I believe, at this point, it is probably one to three kilometres to the west of Logan Lake is where we’re seeing it at this time,” fire information officer Erin Bull said during a Saturday afternoon virtual town hall meeting put on by the Thompson-Nicola Regional District.

Bull also said crews are focusing on structure protection in the Tunkwa Lake area, where some Rank 6 fire activity — the most intense level at which a forest fire can burn — has been seen.

Castanet is monitoring the Tremont Creek fire closely. This story will be updated when more information becomes known.

The evacuated community of Logan Lake is in the dark on Saturday with an aggressive wildfire approaching.

According to an update sent to Logan Lake residents from municipal officials just before 2 p.m. on Saturday, the community has lost power. BC Hydro said the outage is due to fire, impacting more than 1,500 customers.

The update also provided some additional information about the blaze.

“Last night, the fire moved slowly in the direction of Logan Lake,” the update said.

The update also said the Highland Valley Copper mine site has been removed from the evacuation order area, but it remains under alert.

“Due to the location of the fire and our current resources, no further entry permits will be issued for any reason,” the update read.

According to the BC Wildfire Service, the Tremont Creek fire has seen growth in the area of Bose Lake, about 10 kilometres west of Logan Lake, and in the Glossy Mountain area north of Highland Valley Copper.

The agency said crews are working Saturday to build a contingency guard south of the fire by widening an existing hydro right of way.

Structure protection personnel are also on scene in Logan Lake.

The BC Wildfire Service said the blaze is estimated at 43,773 hectares as of late Saturday morning — up more than 2,000 hectares from Friday’s mapping.

A massive wildfire that has emptied out Logan Lake has grown again.

The Tremont Creek fire is now sitting at an estimated 41,188 hectares in size.

According to the latest mapping from the BC Wildfire Service, conducted on Friday, the blaze’s perimeter is about seven kilometres north of Logan Lake and five kilometres south of Savona.

An evacuation order for Logan Lake was issued on Thursday.

On Friday night, evacuation alerts were expanded in the Cherry Creek area to include an additional 43 properties. The alerts now extend east to within five kilometres of Mission Flats.

Forecasts are calling for gusty winds this weekend from the southwest, which could prove favourable for Logan Lake but may push the fire toward another community.

Residents in Cherry Creek, Tobiano and Savona remain on alert.

In an update late Friday night, the BC Wildfire Service said heavy smoke in the Tremont Creek fire area resulted in lower fire activity on Friday. Crews are working to expand guards south of the fire, according to the agency.

Ground crews remained on the fire line overnight to monitor the blaze.