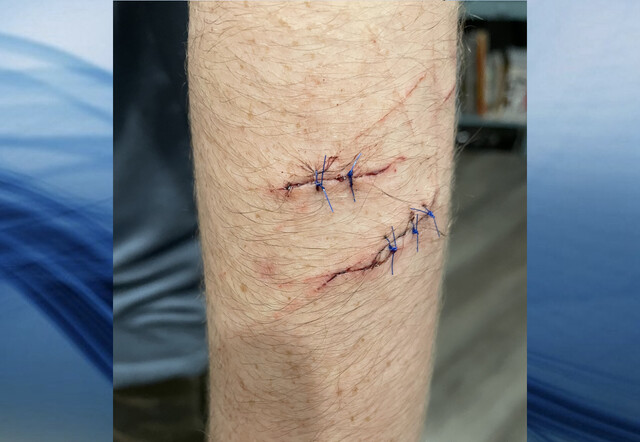 Photo: Contributed
This photo shows the stitches in the arm of the victim of an assault on Saturday on a North Kamloops beach.

Three youths were arrested over the weekend after an alleged beating on a North Shore beach sent a trans teen to hospital — an attack driven by hate, according to the victim’s mom.

Saundra, who asked that her last name not be published, said her 17-year-old, a trans boy, was violently attacked on Overlanders Beach near the Henry Grube Centre on Saturday — punched multiple times in the face and then ordered to cut himself with a knife.

Saundra said her son was with friends when another group of teens approached and started to call him names. She said her son told them to leave him alone, and then they attacked.

“There was a group of seven of them, and five of them started pushing and shoving him,” she told Castanet Kamloops.

“They punched him in the face and all over the body then threw him over the bank.”

At that point, Saundra said, a passerby tried to intervene.

“They were like, ‘Hey, what are you doing?’ The kid said, ‘Oh he owes us,’ or something like that. So the person just kept walking.”

Saundra said her son then pulled out a knife he had for self-defence and told the attackers again to leave him alone.

“Then one of the kids grabs the knife out of my kid’s hand and says, ‘You need to cut yourself.’”

Saundra said her son was humiliated.

“They forced him to cut his arm, they had him crawling on the ground like a dog,” she said.

Saundra’s son and his friends eventually met up with police in a nearby church parking lot. He was taken to hospital for treatment — stitches to his arm and a possible broken nose, according to Saundra.

“They were driven by hate for the fact that my child is different,” she said.

“My child was targeted just simply for being different. ... It kills me. I’m just angry. But what do you do? I want my kid to be who they want to be, right? But at the same time, the world is like, ‘You can’t do these things.’ The world is cruel.”

Saundra said she wanted to share her story in the hopes it might keep another young person safe.

"It could have been worse for my kid. I could have gotten that call that my kid wasn’t coming home. That terrifies me. I’m petrified.”

Kamloops RCMP Const. Crystal Evelyn said three suspects were arrested. She said the call came in as a report of an assault by a group of youths during a party at the beach.

“The three accused were released to their guardians with a court date and conditions, pending the investigation’s conclusion and subsequent charge assessment,” she said.

Saundra said her son told her some of the attackers were filming the incident on cellphone cameras.

Evelyn said she couldn’t confirm whether police had seen any such video, but she asked anyone with information — or footage — to call police at 250-828-3000.

The investigation is ongoing.