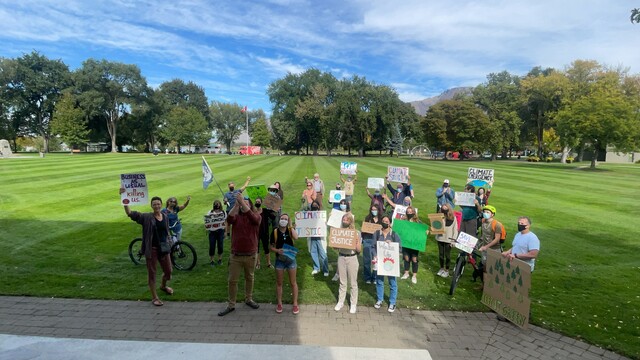 A few dozen protesters gathered in Riverside Park on Friday hoping to catch the attention of local officials.

The group was organized by the Valleyview secondary Environmental Club, but participants spanned more than just the high school crowd.

Starting at Riverside, the group marched to Third Avenue and down Victoria Street to city hall, chanting that they wanted "climate justice."

Some local high school students will walk out of class Friday in hopes of making a difference.

An environmental club at Valleyview secondary has planned a walk out for Friday afternoon to raise awareness about climate change.

“I’m hoping to really bring attention to the matter and show people how urgent this is,” Tlell Schreiner, a spokesperson for the club, told Castanet Kamloops.

“This isn't something we can put off until later.”

Schreiner said the club has invited other high schools to join in the rally, and she hopes members of the public will come — fully masked — as well.

The students will be meeting at the bandshell at Riverside Park at 1:15 p.m. on Friday, Schreiner said.