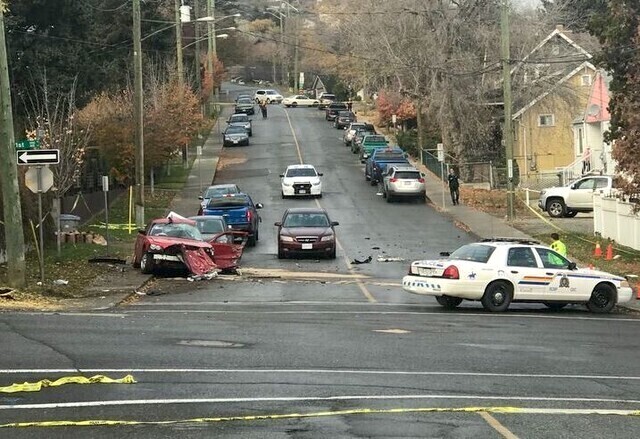 A pickup truck that struck a car in downtown Kamloops in 2019, killing three young Nigerian men, was travelling 110 km/h — more than twice the speed limit.

Reid McKnight, 33, was sentenced to three years in prison on Friday after pleading guilty to one count each of dangerous driving causing death and failure to stop at an accident causing death.

Oluwafeyisola David Adebowale, Daniel Ifeanyi Okocha and Kelvin Adeojo Oluwatosin were killed in an early-morning crash on Nov. 3, 2019, at First Avenue and Battle Street. A fourth occupant of the vehicle they were in survived.

The victims were in a Dodge Charger heading home from a night out downtown. McKnight was driving a blue Ford pickup truck.

He fled the scene after the crash, court heard. Mounties found his identification, credit card and cellphone in the truck and went to his nearby house, where he was visibly injured. He was arrested and taken to hospital for treatment.

Crown prosecutor Chris Balison read an agreed statement of facts that detailed McKnight’s driving in the moments leading up to the collision. Balison said data retrieved from McKnight’s truck by police showed he was travelling at 110 km/h five seconds before the collision, and brakes were applied two tenths of a second prior to impact.

McKnight was headed west on Battle Street when he blew through a stop sign and struck the sedan, which was travelling south up First Avenue. The sedan was travelling between 50 km/h and 52 km/h at the time of the crash, court heard.

McKnight was born and raised in the Winnipeg area. He enlisted in the Canadian Armed Forces at 18 and has worked as a soldier since then, except for a three-year period ending in 2017 when he was caring for a sick relative.

McKnight, who spent nearly a year in Afghanistan, will lose his job as a result of the convictions.

“He is anticipating that he will be discharged,” defence lawyer Jeremy Jensen said.

“What brings him here today is a series of terrible decisions — driving in the manner he did, of course, and failing to remain at the scene. Driving like that and leaving the scene is not Mr. McKnight. That is the antithesis of who he is and where his core values lie.”

Despite fleeing, Jensen said McKnight has been co-operative with the police and has accepted his responsibility for the crash.

McKnight apologized in court on Friday.

“I’m profoundly sorry and I’m here to take full responsibility for my actions,” he said.

“The collision Mr. McKnight caused by his driving had catastrophic consequences,” she said, describing the grief of the deceased’s loved ones as a “cavernous sorrow.”

“The devastation wrought by the horrendous circumstances of this case is palpable and profound. … Hopefully in time the wounds can heal somewhat.”

Once he’s released from prison, McKnight will be bound by a 10-year firearms prohibition and a three-year driving ban. He was also ordered to submit a sample of his DNA to a national criminal database.

The driver charged in connection with a devastating 2019 hit-and-run crash in downtown Kamloops that killed three young Nigerian men has pleaded guilty.

Reid McKnight, 33, pleaded guilty in B.C. Supreme Court on Friday morning to charges of dangerous driving causing death and failing to stop at the scene of an accident causing death.

Oluwafeyisola David Adebowale, Daniel Ifeanyi Okocha and Kelvin Adeojo Oluwatosin were killed in an early-morning crash on Nov. 3, 2019, at First Avenue and Battle Street. A fourth occupant of the vehicle they were in survived.

The three deceased were in a Dodge Charger and McKnight was behind the wheel of a Ford pickup truck. Each of the victims had travelled to Kamloops from Nigeria to study at Thompson Rivers University.

McKnight fled the scene after the collision. He was contacted by police hours after the crash, but he wasn’t arrested and charged until 10 months later.

An agreed statement of facts is being read in court on Friday morning. Lawyers are presenting a joint submission for a three-year prison sentence.

McKnight, a Canadian Forces Soldier, is wearing a suit jacket seated in the prisoner's box of Courtroom 5D at the Kamloops Law Courts.

Relatives of one of the deceased are expected to read a victim-impact statement via video link on Friday as part of McKnight’s sentencing.

In addition to the criminal charges, McKnight is also facing a number of lawsuits filed by the families of the victims and other parties.

Castanet Kamloops is present at the sentencing hearing. This story will be updated as more information becomes known.