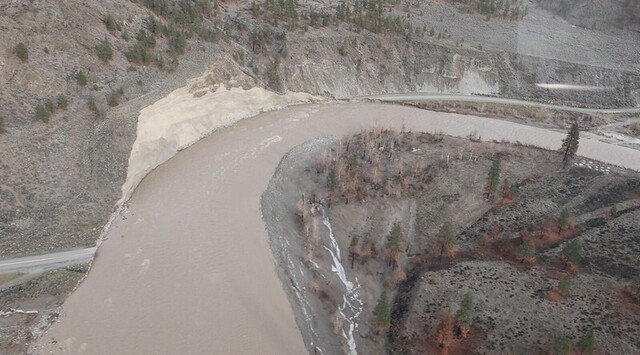 Photo: BC Gov
BC Highway 8 - 14 KM east of Spences Bridge

The provincial government is working on using forestry roads to provide access to the flood-devastated Nicola Valley between Merritt and Spences Bridge.

The Highway 8 corridor was the hardest hit by flooding in November. Along a 45 kilometres stretch of highway, there are 23 sites of “significant damage” consisting of 20 washouts and three damaged bridges.

There is no timeline as to when the highway will be reopened, with the government only saying it will take “significant time” to repair.

The government has started publishing a weekly newsletter on the rebuild of the Highway 8 corridor, in an effort to provide information to residents still many months away from returning home — if they are lucky enough to still have one.

“MOTI is working in close collaboration with leadership from Cook's Ferry Indian Band, Shackan Indian Band, Nooaitch Indian Band, Lower Nicola Indian Band and the Thompson-Nicola Regional District (TNRD). We are also working with BC Hydro to ensure that as temporary access points are created, these areas are accessible to restore power,” said MOTI’s newsletter.

BC Hydro said service was restored on Friday to 10 customers in Nooaitch along Shackelly Road, and about 30 customers now have power between Spius Creek and Dot Ranch.

BC Hydro crews are working to replace equipment and restore service to additional customers in the area this week. The storm destroyed 87 power poles and 14 transformers along Highway 8.

The government says it is working as quickly as possible to restore road access to the valley and is currently working on the Curnow Bridge.