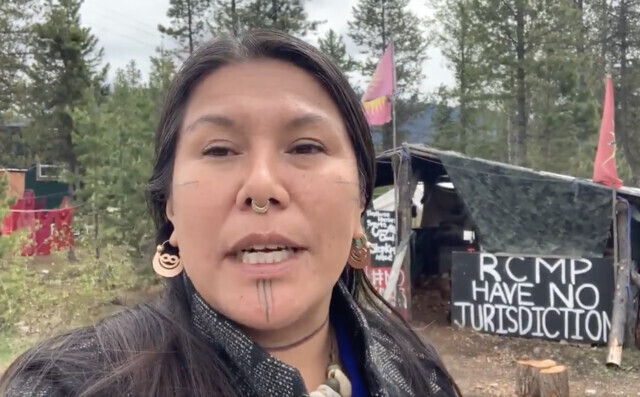 Kanahus Manuel and a fellow Tiny House Warriors protester were acquitted on mischief charges on Wednesday — in part because an RCMP corporal pointed the finger at the wrong person.

Court heard a construction crew showed up in the area to repair a stretch of highway. Once there, the workers were approached by a group of protesters.

Manuel and Jules were accused of harassing the workers — following them around and shouting at them. Some of the protesters were carrying red dresses or shirts attached to sticks.

One witness described the protesters as shouting, “[We] have no authority, not your land,” Kamloops provincial court Judge Ray Phillips said Wednesday in acquitting the pair.

At trial, RCMP Cpl. Todd Bowden said he stopped at the scene after being flagged down by one of the workers.

Bowden said in court he was “100 per cent satisfied” that the people he dealt with at the scene were Jules and Manuel, who is also known as Amanda Soper.

“At trial, Cpl. Bowden identified a lady seated in the back seat of the courtroom with a green scarf as the accused Amanda Soper,” Phillips said.

“As it turned out, Cpl. Bowden’s in-court identification was incorrect — the lady identified in the courtroom was not Amanda Soper.”

Phillips said all of the evidence at trial left him uncertain.

“In the end, the court is left in doubt as to whether the two accused were, in fact, the same person observed by the flaggers as the ones who committed the mischief in question,” he said.

“Accordingly, the accused are hereby acquitted.”

Waiting at the bus stop