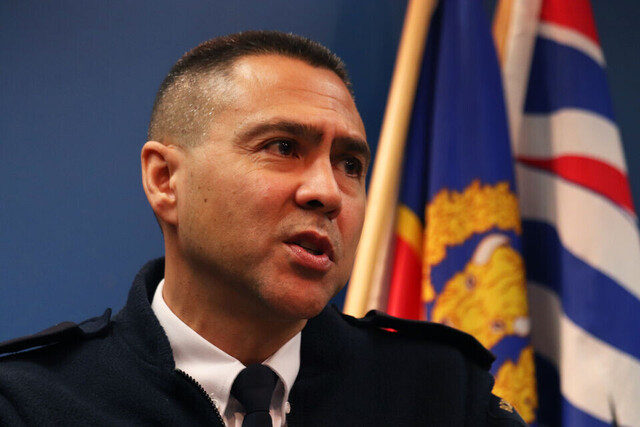 As overdose deaths hit record highs, Kamloops’ police chief says he believes the time is now for a new response to addiction and related issues — a safe supply and community court.

It’s been a year since RCMP Supt. Syd Lecky first called for safe drug supply in a council meeting — a statement supported by Mayor Ken Christian.

Lecky told Castanet Kamloops overdose death numbers were spiking last March when he delivered the message to council, and another grim record has since been set.

"Following up on this a year later, we have set a new record for deaths — people who are dying in their homes, mothers whose children are not coming home," Lecky said.

"They're dying alone, oftentimes because of the stigma associated with it."

The BC Coroners Service reports there were 2,224 overdose deaths province-wide in 2021 — 77 of which were in Kamloops.

Lecky said in the past year, even as deaths have climbed, he hasn’t seen the government make any real moves to help provide a safe drug supply for people in Kamloops.

"Safe supply is obviously related to our overall opioid issue, which is getting worse," he said.

"It is reflective of our increasing death rates in that particular genre. It's tied to our property crime, it's tied to our mental health [and] our missing persons calls for service. You can bring it all together and — I keep saying — none of this is in isolation."

Not only are deaths impactful for loved ones, Lecky said the overdose crisis has had an impact on first responders who frequently attend overdose calls on a weekly or sometimes daily basis.

Lecky said it’s “numbing” for Kamloops first responders finding young adults who have died due to toxic drugs. He said the toxic drug supply has also come at a high cost when it comes to the criminal justice system, the healthcare system and policing resources.

“If you just want to look at a dollars and cents basis — that’s really what it comes down to for some — it makes sense to try something differently. We're paying for it in other ways,” Lecky said.

“We’re paying for it in the crime levels, the victims of crime, the person who smashes a $2,000 store window to grab a $100 item out of the window — we're paying. And so let's just find a different way to pay and give it a shot.”

Lecky said after he called for a safe supply one year ago, he received many supportive emails and comments from people including police, as well as service providers and organizations he’s worked with in the past.

He said safe supply has been tried in other places worldwide and within Canada, and has seen some level of success. Lecky said he would like to see it happen in Kamloops as a test site, where data might help to evaluate success.

“I'm willing to work in partnership with any government agency and our service agencies that support folks to see if we can all get on the same page. And, more importantly, that's also a reason why I've been advocating for community courts,” Lecky said.

“Whether it's mental health court or mental health and addictions, we need to do a better job at coordinating the delivery of the service to provide it to be able to help our clients.”

Lecky said a community court — which he said is typically a voluntary, diversion or sentencing court — would help coordinate resources for those struggling with mental health and addictions.

He said there will always be an element of people who will need to go through the traditional jail system, but some need other supports.

“Whatever the community agency is that supports it — mental health, Interior Health, police, probation. … Whatever we can do, to get them to all coordinate, that’s what I'm looking for,” he said.

“If we can help save a few people, great. If we can help save hundreds, better. But that's why I'm so anxious to hear more about the community courts. It may not be the panacea, but it's something else different than what we've been doing up to this point.”

A group of Kamloops law professors, lawyers and outreach workers submitted a community court proposal to B.C.’s Attorney General. The ministry said it received the proposal in fall 2021, and the chief judge of B.C. provincial court is currently reviewing the application.

In an email to Castanet Kamloops, a ministry spokesperson said they couldn’t provide a timeline for when a decision would be made on the process.

“When a proposal for a new court is put forward, the chief judge of the provincial court makes the final decision, in consultation wth the ministry and other justice partners,” the spokesperson said.

Lecky said in the coming year, he would like to see announcements made to support a community court and safe supply in Kamloops, and he would also like to see a coordinated approach to measure how successful the programming is.

“I think it just provides us an opportunity to save lives at the end of the day,” Lecky said.