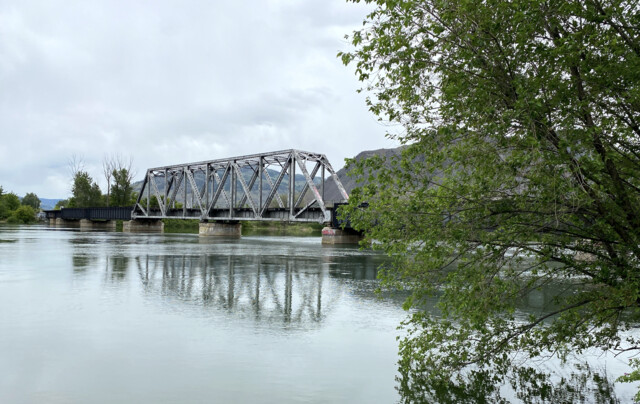 As the flood forecast worsens for Kamloops, the B.C. River Forecast Centre is placing the Thompson River on flood watch.

The provincial agency upgraded a high-streamflow advisory Tuesday to a flood watch, in place for the waterway between Kamloops and Spences Bridge. The Thompson now joins the North Thompson and South Thompson rivers, which were already on flood watch.

Provincial modelling is projecting a potential surge in water levels in the North Thompson late this week or over the weekend, with the South Thompson likely to peak sometime next week.

“Rivers in the region are very high for this time of year and are extremely vulnerable to additional runoff at this point,” the B.C. River Forecast Centre said in a statement on Tuesday afternoon.

“An upcoming major concern is the weather forecast for a potential long-lasting rain event in the headwaters of the South Thompson, North Thompson and Cariboo Mountains later Tuesday through early Thursday.”

The City of Kamloops activated its Emergency Operations Centre on Monday, and city officials said Tuesday a “drastic spike” in river levels is possible, given the current forecast.

The B.C. River Forecast Centre is advising British Columbians to stay away from fast-flowing rivers and potentially unstable riverbanks during high streamflow periods.

With heavy rain forecast over the the North Thompson headwaters, the City of Kamloops’ utility services manager says the city is preparing for a “drastic spike” in river levels.

Greg Wightman said the city has activated its Emergency Operations Centre to a Level 1 activation — the lowest level of activation — knowing they need to be “hyper aware” and as prepared as possible for high waters.

Wightman said the EOC will likely remain active for several weeks as river levels are expected to remain at a high level.

“The kind of worst-case scenario that we've been speaking about for a while — the North and South peaking at the same time — is becoming more and more a possibility here,” Wightman said.

“We are expecting high water, but everything is going to be dependent on rain right now, and severe rain storms,” Wightman said.

He said predictions show between 50 and 80 millimetres of rain could fall over the North Thompson.

“If that were to occur, we're going to see a drastic spike in these rivers — potentially as much as a meter to a meter and a half. Best case scenario, those rainstorms don't happen and the rivers will likely stay similar levels to what they are right now,” Wightman said.

“It's going to be a really concerning couple days ahead, we're going to do everything we can to keep an eye on weather forecasts and stay in contact with all the emergency management partners that we have.”

According to Wightman, B.C. River Forecast Centre data shows the city could see levels of flooding similar to 1999.

However, Wightman said the city is prepared to protect itself in a worst case scenario — a 1972 level flooding event.

“1972 is not out of the question with some of the rainstorms that we have projected. But we're preparing right now to protect ourselves to what we saw in 1972, just to make sure that we're as prepared as possible,” he said.

Wightman said the city is better prepared for extremely high waters than it was during past flooding events due to better predictive modelling tools and infrastructure improvements.

He said the community needs to be very vigilant at this time and do everything they can to protect their property, including taking advantage of sand and sandbags made available from the city.

He said residents should keep a safe distance from the river as Kamloops Fire Rescue crews aren’t able to execute river rescues. KFR boats are unable to move underneath some of the bridges due to high water levels.

“Safety is going to be extremely important over the next week here as the rivers are flowing extremely high. And we're asking that everyone stay back back from the rivers,” Wightman said.