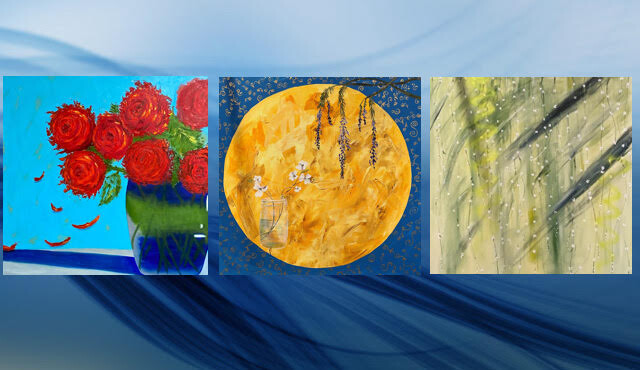 A private art gallery inside a downtown Kamloops office building is shutting down after three paintings by local artists were pilfered this week in an overnight heist.

Deborah Fong, who curated Gallery 635, said she received a call on Thursday morning notifying her some paintings displayed in the space had been stolen.

Fong said one of the building owners arrived to work in the morning and discovered three paintings were gone.

“It's just really odd, because it's not like you can go and sell them somewhere else. They don't have fame — it’s not like the Mona Lisa,” Fong said.

“The gallery is mostly for local art lovers ... and for local artists to have a place where they can show their work.”

Fong said the building owner looked at footage from the security cameras, which captured an image of the culprit.

"They did use tools to break in through the back door,” Fong said.

The three stolen paintings were three feet by three feet in size. Fong said one of them was priced at $1,300 and the other two were $800 — three of the more valuable paintings on display in the gallery.

Fong said it seems the thieves were targeting artwork based on price.

She said the $1,300 piece was from local artist Isabelle Faulkner, one was painted by herself and the other was a collaboration between Fong and another artist.

Fong said she would love to see the paintings returned, particularly Faulkner’s, which depicts a vase of bright red roses against a vibrant blue backdrop.

“I know it was the first time that she purposely did a painting for a show,” Fong said.

“If I only got one piece back I would want it to be Isabel’s work.”

Fong said she has shows booked until September 2023, but will be canceling them and closing the gallery doors due to concerns around security.

“It’s horrifying, it’s just so sad. There’s not a lot of places in Kamloops where local artists can show their art. There's the Kamloops Arts Council that runs the courthouse gallery and they do a great job of promoting local art, but this was one of the last private galleries,” Fong said.

She said Gallery 635 space has always been unattended, with paintings locked with special hardware to the wall, and good locks installed on the building itself.

“It's not like we can afford to have an attendant here full time, and even if we had, it wouldn't make a difference because the attendant would still only be here in the day,” Fong said.

Gallery 635 had been operating inside the foyer of 635 Victoria St., which is the home of Castanet Kamloops and a handful of other local businesses.

Fong said the gallery has run continuously for about four years in the roomy hallway space.

She said the initial show was put on alongside the arts program at Thompson Rivers University, showing students’ work.

The gallery has since shown work from several artists, accepting submissions from students to notable artists with decades of experience.

Police are investigating the theft. Mounties could be seen in the gallery space on Thursday morning gathering evidence.