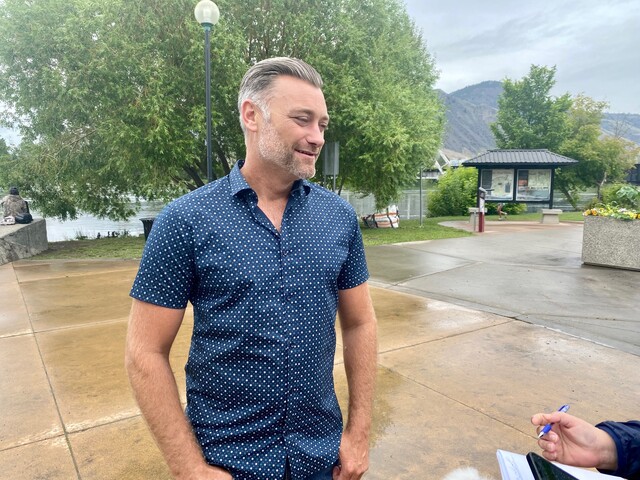 Photo: Tim Petruk
City of Kamloops utility services manager Greg Wightman speaks to reporters on Wednesday at the flood monument in Riverside Park. He said the B.C. River Forecast Centre remains concerned despite the receding levels of the Thompson RIver.

While the Thompson River is receding, Kamloops is still not out of the woods on the flood front.

The Thompson River has fallen more than half a metre since it peaked just under 7.8 metres on Saturday. But Wightman said a potentially severe storm in the forecast for early next week has the B.C. River Forecast Centre worried about the possibility of flooding somewhere in the province.

Wightman said meteorologists don’t know where in the province the potential storm might hit, and that uncertainty has forced the B.C. River Forecast Centre to stay on high alert.

“They’re still concerned that they have a very high degree of uncertainty right now in the forecasts,” he said.

“We’re seeing a very severe event potentially early next week, Monday or Tuesday. Again, we’re not certain where that event is going to hit — anywhere from Washington up to the Yukon, and it could be in the middle and settle over the North Thompson or South Thompson.

“We’re hearing very drastic predictions of what it could be as far as the amount of rain that may fall, but there is a lot of uncertainty around that.”

Because of that uncertainty, Wightman said the City of Kamloops is opting to keep its emergency operations centre active. Daily inspections of dikes and storm drains will also continue for the time being.

Overall, Wightman said Kamloops has been “fortunate” to have had the co-operation of Mother Nature the last couple of weeks, when flood fears have been elevated.

“If we’re able to get through Monday, this forecasted rainstorm for Monday, we’ll be in a significantly better spot than we thought we would have been,” he said.

“We’ve seen a pretty rapid decline in the snowmelt, so the rivers will start to drop into next week if we don’t get that rain. Within about a week’s time, we should be in a position where we can handle a little bit of a rainstorm — whereas right now, with the rivers being as high as they are, there’s just no capacity for any amount of rain.”