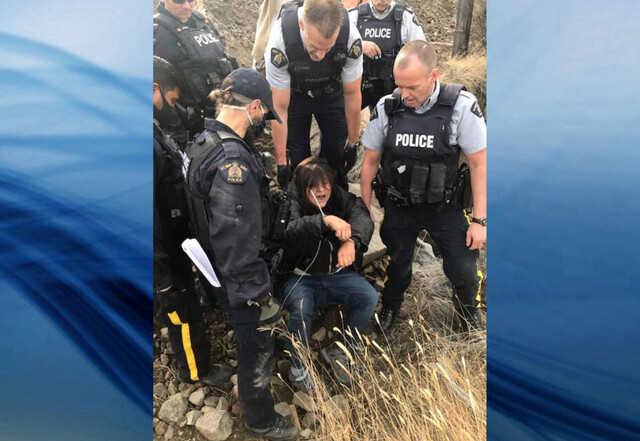 Photo: Facebook/Wethesecwepemc
A protester is arrested along Mission Flats Road on Oct. 15, 2020.

Trans Mountain crews were undertaking “very critical” work the day a group of anti-pipeline protesters disrupted construction along Mission Flats Road two years ago, a judge has been told.

The Crown closed its case Tuesday afternoon in the criminal contempt trial of four protesters accused of storming a Trans Mountain worksite on Oct. 15, 2020, in violation of an injunction put in place two years earlier.

Court has viewed three videos depicting the events of the day — one filmed by an RCMP constable’s body cam and two others shot by someone affiliated with the group of protesters and streamed at the time on Facebook Live.

Each of the videos depicts a chaotic scene with lots of yelling and screaming from the protesters as they were removed from the site by police.

In cross-examining the Crown’s witnesses, the accused have maintained the force used by Mounties was excessive and unnecessary. Officers in the videos appear measured while dealing with the protesters, who were carried from the work site to RCMP vehicles.

The final Crown witness on Tuesday was Karen Delorey, a former high-ranking RCMP officer who now works as an assistant regional security manager for Trans Mountain.

Delorey said crews were undertaking important work when the protesters arrived at the work site. She was called to the scene by security guards and arrived before Mounties.

“We had been, and in the weeks leading up to that as well, we had been doing some very critical drilling under the Thompson River,” she said.

“And during that period of time we had a number of protest activities that were happening.”

Each of the accused is self-represented, which has made for a bumpy process in court.

Thomas and Cavanaugh have been reprimanded by B.C. Supreme Court Justice Shelley Fitzpatrick for asking irrelevant and improper questions of Crown witnesses, including personal questions and at least one about the “nationality” of a constable of South Asian descent.

On Tuesday, court was told the Crown disclosure belonging to all of the accused recently went missing. Thomas said she had been storing the documents in a box that she can no longer find. She suggested the box might have been stolen.

“I just assumed it would pop up and it hasn’t,” she said.

Fitzpatrick ordered the trial to continue in the absence of the disclosure.

“They are the authors of their own difficulties, if this is going to pose a difficulty here,” she said.

The four accused are slated to open their case on Wednesday morning. It's not yet known whether they will call any evidence, but they have indicated that they plan to.

The trial is scheduled to conclude on Friday.