For the first time in a year, motorists can now drive from Merritt to Spences Bridge

Photo: BC gov. Flickr
Highway 8 has been reopened between Merritt and Spences Bridge.

The reopening of Highway 8 between Merritt and Spences Bridge will now reconnect a number of isolated communities along the route.

Transportation and Infrastructure Minister Rob Fleming announced the reopening of Highway 8 Wednesday, 361 days after extreme weather washed much of the highway into the Nicola River.

The November 2021 storm washed out 25 distinct sites, and another five washouts occurred this past summer.

As part of the efforts to reopen the highway, two temporary bridges, 73-metres and 85-metres in length, have been built. More permanent construction work will continue along the highway.

Fleming praised the work of the contractors involved in the repairs, calling the work “unbelievable.” The workforce involved was more than 30 per cent Indigenous.

“[The work] will be studied by engineers and road builders for years and decades to come,” Fleming said.

“Completing this work in under a year tells you everything you need to know about the people and their level of dedication in working on this project for the past year.”

The Nooaitch Indian Band, Shackan Indian Band and Cooks Ferry Indian Band have all been significantly impacted by the year-long closure of the highway.

During Wednesday's announcement, Shackan Indian Band Chief Arnold Lampreau said the highway is a “crucial road for a lot of our people.”

“It's not just a secondary road to us ... This is what connects to us to our families and our resources and our people and our spirit,” she said. “It has significant value to our nation.”

For the first time in close to a year, motorists can now travel between Merritt and Spences Bridge.

After extreme weather across B.C. wiped out large sections of Highway 8 into the Nicola River in November 2021, the highway has now reopened for travel.

The extreme weather on Nov. 14 and 15, 2021 caused flooding and landslides across many areas of the province, including the Coquihalla Highway, Highway 8, Abbotsford and Princeton.

While the heavily damaged Coquihalla Highway was reopened to commercial traffic a month after the storm, repairs on Highway 8 took much longer.

Seven kilometres of the highway were completely washed away, and there were five separate slide sites between Merritt and Spences Bridge.

Fleming noted that while enough repairs have been made to reopen Highway 8 to vehicle traffic, construction will continue along the route as more permanent repairs continue. Some sections will be speed restricted and not all areas of the highway are currently paved.

Fleming praised the work crews who've spent the last year rebuilding the highway. He noted the work will be studied by engineers for decades to come. 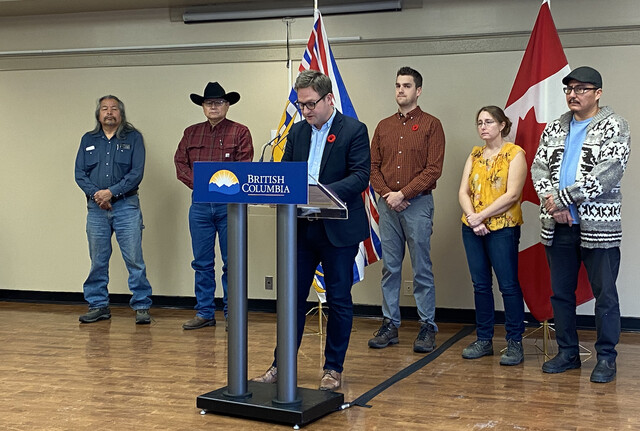