Jury now deliberating in case of man who claims self defence

Jury out for deliberations 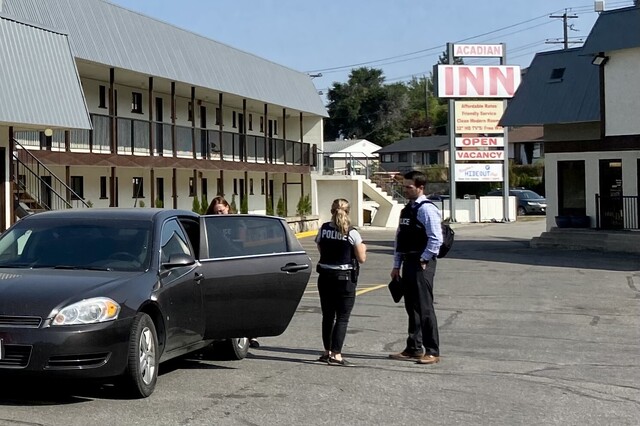 Photo: Castanet Staff
Police parked outside the Acadian Inn on Columbia Street on Sept. 12, 2020, the day Daniel Myles was fatally stabbed nearby.

The 12-person jury tasked with deciding the fate of a Kamloops man charged with murder is now out for deliberations.

Sanford, 33, is standing trial on one count of second-degree murder, accused in the slaying of 34-year-old Daniel Thomas Myles.

Sanford does not deny delivering the stab wound that killed Myles but claims he was acting in self-defence.

Jurors were urged Monday to consider self defence when deciding the fate of a Kamloops man on trial for the murder of someone described as his “bully” and “tormenter.”

James Sanford, 33, is charged with one count of second-degree murder in the Sept. 12, 2020, stabbing death of 34-year-old Daniel Thomas Myles.

Myles died following an altercation outside the Acadian Inn, now known as Canada’s Best Value Inn, on Columbia Street. Court has heard Myles was stabbed once in the back and collapsed on the front step of a home in the 1300-block of Columbia Street.

In his closing arguments to the jury on Monday, defence lawyer Jay Michi said there is no question that Sanford delivered the stab wound that killed Myles — but, he said, he was acting in self-defence.

Jurors heard Sanford and Myles were involved in a protracted conflict dating back more than three months. In that time, Myles had threatened to kill Sanford more than once. He also smashed one of the windows of Sanford’s suite at the Acadian Inn and sprayed bear spray inside.

At trial, court heard police found gasoline on Sanford’s back balcony and a jerry can nearby. Sanford was told by a friend that Myles had been seen with a jerry can hours earlier.

Sanford told police he could smell gasoline a short time before the altercation with Myles. He also said a large rock was thrown through one of his windows around the same time — something he blamed on Myles.

Michi said Myles was “the aggressor.” He asked jurors to consider whether Sanford “reasonably believed” that Myles intended to harm him.

“What other reasonable conclusion could he have possibly drawn? His bully, his tormentor, the man who’s been victimizing and persecuting him, is just leaving the back alley after his window has been smashed. And he smelled and he saw the gas on his back deck.”

“Anyone in his shoes would have been scared for their life,” he said.

“Mr. Myles was never going to stop. He was obsessed with Mr. Sanford.”

In her closing submission, Crown prosecutor Alison Buchanan said Sanford made a decision to take matters into his own hands.

“He armed himself with a knife and went looking for Dan Myles,” she said.

“When he saw him, he chased him down and stabbed him. James Sanford did not act in self defence — he acted with intent.”

Buchanan said the threat to Sanford was not imminent.

“You cannot chase someone down and stab them,” she said.

“If Mr. Myles had intent, he would have lit the gas. … The threat is vague at best, and he [Sanford] chooses to use lethal force. How can that be reasonable in the circumstances?”

Michi pushed back on that point, telling jurors Canadian law does allow for lethal self defence in some cases.

“The law doesn’t require you to be a sitting duck,” he said.

“A person does not need to wait until they or another person has been assaulted to defend themselves. One is allowed, in certain circumstances, to strike pre-emptively. ... The defence says Mr. Sanford was in just such a circumstance.”

Jurors are expected to begin their deliberations as soon as Tuesday afternoon.