Driver believed to be drunk

Police won't comment on whether the driver of the truck that drove through the homeless encampment on Kelowna's Rail Trail remains in custody or has been charged.

Cpl. Judith Bertrand says investigators are "waiting to see how things unfold with the investigation" before commenting further about the horrific incident that sent a man to hospital with significant injuries.

Just after midnight, a black Dodge Ram drove through the city-sanctioned encampment, struck a tent and dragged it more than 100 feet along the Rail Trail before coming to a stop.

A man inside the tent survived, but he was taken to the hospital with significant injuries, according to police.

In a previous press release issued Sunday morning, Inspector Beth McAndie of the Kelowna Regional RCMP said alcohol appeared to be a factor in the incident, and the driver of the truck was arrested at the scene.

But police won't say whether the man remains in custody, if he's been charged yet, or if the incident is believed to have been an intentional act of violence.

One encampment member, Brandon, told Castanet that he worried the incident was a case of anti-homeless sentiment boiling over in the community.

In a statement, Mayor Colin Basran called the incident at the city-sanctioned homeless encampment "horrific."

“With five deadly overdoses within nine hours yesterday and last night’s horrific incident between a truck driver and a person using the temporary overnight shelter, the need for more shelter space, complex care facilities is obvious," he said.

The man who was behind the wheel of a truck that drove over a tent and seriously injured a man at Kelowna's homeless encampment overnight appears to have been intoxicated, according to police.

In a press release from the Kelowna RCMP, Cpl. Judith Bertrand says police responded to the Rail Trail encampment just after midnight, for a report a man had been run over by a truck.

"Police officers attended the accident scene and arrested the driver of a black Dodge Ram with Alberta plate," Cpl. Bertrand said in the statement.

"Those on scene aided the victim until the Kelowna Fire Department and Emergency Health Services could safety transport the victim to the hospital where they are receiving medical care for significant injuries."

Earlier reports from people at the scene indicated two people were in the tent when it was run over and dragged, but police say just the one man was involved.

“The investigation is still ongoing but it appears that alcohol was a factor," said Inspector Beth McAndie, Investigative Service Officer for the Kelowna Regional RCMP.

"In order to have a fulsome understanding of what occurred and why, a Traffic Analyst and officers from the General Investigation Section are engaged in the investigation."

In the press release, Cpl. Bertrand repeatedly used the term "accident," but there was no mention as to whether police believe the driver of the truck purposely drove through the encampment. Castanet has reached out to the Kelowna RCMP for more information about whether the driver of the truck remains in custody, or is facing any charges.

"The area near the accident was populated by several individuals living in temporary shelters and tents. We are grateful that no one else was injured," Cpl. Bertrand said.

While it's a quiet, peaceful Sunday morning at Kelowna's downtown homeless encampment on the Rail Trail, the night was anything but.

Some time before midnight, a truck drove through the encampment and ran over an occupied tent. Skid marks on the Rail Trail show the tent was dragged roughly 100 feet, underneath the truck.

Members of the encampment tell Castanet there were two people inside the tent at the time, but they believe the two people survived.

One man staying at the encampment, Brandon, said he heard screeching tires and yelling overnight. He says he ran up to the truck, jumped in the back of it and banged on the windows, telling the driver to stop.

Brandon says the driver appeared calm, but "a bit out of it."

Paramedics arrived and took the people inside the tent away, but those at the encampment said police told them the pair had survived the terrifying incident.

Brandon says several members of the encampment ensured the driver remained on scene until police arrived. It's not clear if the driver was arrested.

Sunday morning, the black Dodge Ram with Alberta licence plates remained on scene, the tent stuck underneath the passenger side. A tow truck took the truck away at about 8:30 a.m., while police cleared the mangled tent.

Several members of the encampment expressed concern about the disturbing incident. Brandon said he's worried the incident is a case of anti-homeless sentiment boiling over in the community. He says he's heard rumours that there's been "a hit put out" on them, "just for being homeless."

Castanet has reached out to the Kelowna RCMP for more information about the incident. 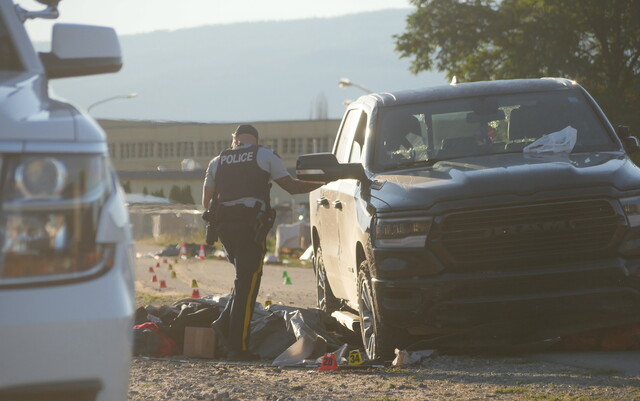 Photo: Nicholas Johansen
A truck drove ran over and dragged a tent overnight at Kelowna's homeless encampment on the Rail Trail. 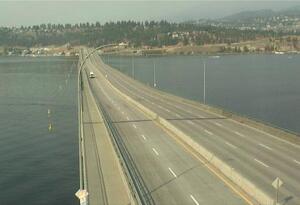