Photo: City of Penticton
Artist rendering of configuration of homes on the Naramata Bench

The company behind a failed proposed residential development above the Naramata Bench will be back before Penticton City Council on Tuesday, to give details for a single-family neighbourhood development plan.

Canadian Horizons made an unsuccessful bid for local zoning amendments for 1050 Spiller Road in 2021. There were plans for more than 300 homes in the development, but with public backlash, Penticton Indian Band opposition and protestors, city council denied the Official Community Plan amendment that would have allowed it to proceed.

The conceptual lot layout plan proposes 112 rural residential lots ranging in size from 0.5 to 1.5 acres, which city staff called "a substantial reduction from the 300-plus lot proposal," in a news release on Friday.

The applicant will also include Parks and Recreation zoning throughout the property.

Staff added that Canadian Horizons has spent time making "significant amendments" to the development plan to address many of the concerns heard from the public in the past proposals.

The company has been lobbying the B.C. Government for legislative changes that would see the province, rather than municipalities, have final say on approval for housing projects.

Canadian Horizons also made headlines last fall for suing the City of Kelowna over a refusal to grant a subdivision application.

Staff are recommending that council endorse the community engagement plan as outlined. If approved, the city would engage with neighbours and stakeholders to see what the community’s thoughts are for the proposal and future land use designations on the subject property.

Once engagement has concluded, staff will prepare a summary of the results that will be shared with the applicant, Council and the public.

Council will review the proposal on Tuesday. 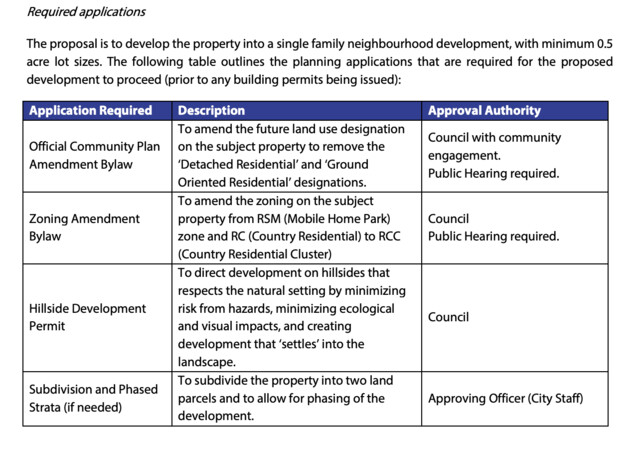