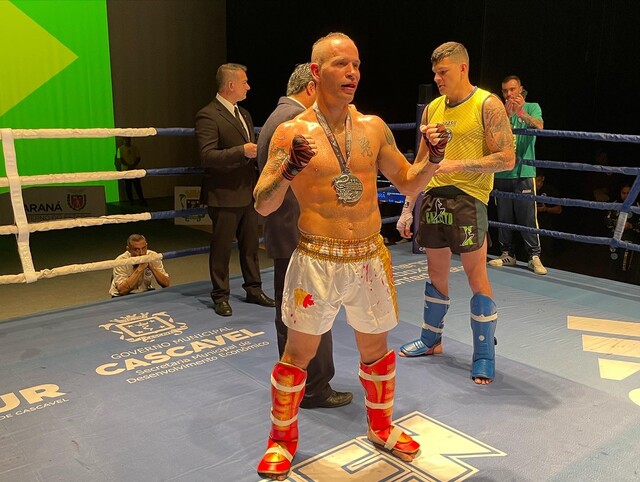 A Penticton man who credits martial arts with his journey to sobriety and success hopes his story will serve as an inspiration to others.

Dustin Little is the head kickboxing coach at Pacific Top Team Penticton, and recently won a silver medal against a top fighter at the World Association of Kickboxing Associations (WAKO) Pan-American Championships in Cascavel, Brazil on Nov. 16.

But the road to that success was long and hard-earned, and not without its challenges.

Growing up on a reserve in Saskatchewan was tough, facing poverty, abuse and a lack of immediate family.

"And then I was 10 years old when my stepdad brought me to British Columbia. He ended up getting picked up by police and I got put into foster care," Little said.

"But that was probably the best thing that ever happened to me. Because from there, I finally got to get into a good home, I had a really good foster mother. And she taught me all sorts of morals; love, respect, honour."

Those lessons would resurface later in Little's life. In the meantime, though, he still had a troubled adolescence and turned to drugs and alcohol. Then, at age 20, he found martial arts.

"It was kind of the thing that kept the demons away, kept my problems away," Little said.

But drinking remained an issue, until nearly two years ago, when Little decided enough was enough.

He quit alcohol and drugs and dove back into kickboxing to help him stay sober, crediting it as a huge part of his ability to kick the habits to this day.

"It's every aspect of your life, the discipline, the honour and the respect. The fact that this is something that can clean up a person's life, just like it cleaned up mine, speaks volumes to martial arts," Little said.

Little began training hard and discovered WAKO Canada, and learned they had tryouts for the team that would be heading to Brazil in November 2022.

"So I gathered up the courage to go out to Toronto for the tryouts. And it was incredibly hard, incredibly difficult. And at the end of the tryouts, I found out that I made the team," Little said.

He ended up in the finals facing a Brazilian fighter with 20 pounds and dozens of fights more than him, but managed to hold his own before losing via decision.

Little is proud of his accomplishment, and hopes to continue to share his skills with interested learners in Penticton.

"I know that it's no secret that Penticton has a lot of dangerous stuff going on. And martial arts is the best form of self-defence," Little said.

"The first thing I teach my students and my clients is to walk away or run away if possible, but if that's not possible, then they would know how to defend themselves now."

Next up for Little, aside from his ongoing coaching work, is heading to the WAKO Canadian National Championship in Ontario this March. Little will be participating to honour Truth and Reconciliation, a cause dear to his heart.